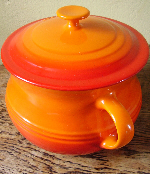 Nights are dark and cold and my cooking has changed to correspond with the changing of the season. Anything that can be put into a pot and forgotten about in the oven while I get some work done scores particularly highly on my dinner scale and last night’s dish got full marks for maximum flavour with minimum effort.

This is based on a Jane Grigson recipe from her constantly referenced Vegetable Book. When we still had lots of vegetables in the garden it was a fantastic resource for the regular gluts; now as I do most of my vegetable buying at farmers’ markets, it still comes in useful for the random piles of roots or brassicas that I end up with. I’ve been getting lots of cabbage from Morris from Gairdín Eden and, as I refuse to actually boil it (too many bad childhood memories!), I am always on the lookout for some different way to cook it.

For this recipe, which Jane calls Stuffed Cabbage in the Troo Style, you only need three ingredients but you can’t skimp on them. Get yourself some good cabbage and make sure you pick up some fabulous sausages – I got some herbal Hodgins sausages, made locally in Mitchelstown and they had a great kick. I’ll give the proportions that I used but I don’t really think that it matters too much if you deviate from them. Tempted though I was to jazz it up a little, Jane does point out that she’s tried adding different herbs, tomatoes and bacon but has always come back to the simplicity of the original. I made this in my lovely bean pot (a present from the Connoisseur) which ensured that not too much of the gorgeous juices evaporated. Serve with something simple to mop up – mashed potato is always good – or you can try the idea from Writing at the Kitchen Table and put a layer of sliced potatoes on top.

Shred the cabbage into large strips. Bring a large pot of salted water to the boil and blanch it for five minutes. Drain it and rinse under the cold tap to stop it cooking.

Skin the sausages – dipping them in boiling water for a minute or two makes this job easier – and mash together. In an ovenproof dish layer the cabbage and sausages, starting with ⅓ of the cabbage and half of the sausages. Repeat and end with a final layer of cabbage on top. Season each layer well. Dot the top generously with butter, cover tightly and put into the oven.

Cook for 2-2½ hours until the cabbage is very tender. Serve with mashed potatoes.