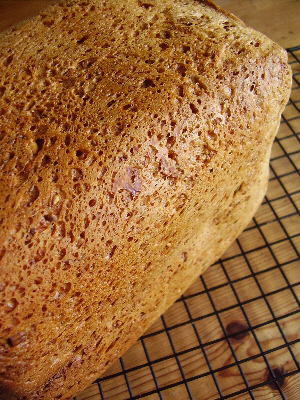 Since Little Missy arrived on the scene, the breadmaker has been working at full tilt. The loaves aren’t the most beautiful but, then again, looks aren’t everything and the convenience and flavour more than make up for it. A few mornings a week, before the Husband heads out the door to work, he loads it up with the ingredients for a Fennel-Aniseed-Caraway Loaf and, as Little Missy and I snooze away, it kneads, proves, knocks back and bakes a loaf of warm, sweet-smelling bread. At least, that has been the routine.

This morning, though, I did a bit of disasterous fiddling with the mixture – thought it was too dry so added some water then figured it looked wet so put in some more flour – and left it to go on its own merry way, or so I thought. I didn’t realise that the amount of mixture added up to a little more than the machine could cope with until, a few hours later, I smelled burning and caught sight of smoke pouring from under the lid.

Fortunately I was there in the house to catch it before it caused too much damage, and it was promptly switched off, plugged out and emptied outside. The bread had flowed over the sides of the internal baking tin and was burning, creating copious amounts of acrid-smelling smoke, onto the cooking element that heats the breadmaker. There’ll be no upping the quanitities of ingredients in future, always presuming that I’ll be able to use it again!

Here’s the recipe for the Fennel-Aniseed-Caraway Loaf that we make at the moment. My midwife recommended I take the fennel, aniseed and caraway seeds in a tea to help my milk production when I started nursing Little Missy but they taste far better in bread. You don’t need to be producing milk to enjoy this bread: it’s especially good toasted and eaten with boiled, scrambled or fried eggs.

My breadmaker is a Cookworks Signature Stainless Steel one from Argos that I got via Gumtree and I normally use it, as below, to make a 2lb loaf. For this machine, you put the liquid in before the flour but I know some machines are different – just check the manual for your own machine.

Add the ingredients to the breadmaker pan in the order specified. Set the machine to a wholewheat bread programme, dark crust, 2lb loaf – and ignore it for the next 3 hours, 40 minutes.