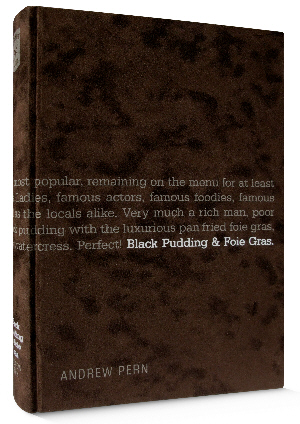 From Burdass-Reared Wold’s lamb to Ampleforth Abbey Apple Tart Tatin, Andrew Pern’s Black Pudding and Foie Gras is as firmly rooted in the food of Yorkshire as his Michelin-stared establishment is embedded in the village of Harome. Andrew’s Star Inn is a 14th century country pub in North Yorkshire which opened 13 years ago. He laughs as he recalls that it all started with just three people – himself in the kitchen, his wife Jacquie working front of house and her mother behind the bar. Now they run a total of seven interlinked businesses in Harome, including self catering cottages, a deli and a butcher’s shop, employing some 120 people.

Andrew is not one to do things by halves and he brought the same level of dedication to Black Pudding and Foie Gras, his first cookbook. He describes the handsome chocolate-coloured velvet-bound book as a “labour of love”, adding that it is self-published because “we decided to do the whole thing ourselves.” That included having someone decipher his scrawl: he wrote the original draft in longhand with a HB pencil. The book was named after his signature dish, which he started cooking 12 years ago at the Star, a well-judged combination of North Country staple with French luxury. It is this rich man/poor man juxtaposition that has made the place stand out – and Michelin come calling. The Star Inn is one of the few pubs in the UK to be awarded a star, and this despite a Michelin inspector telling Andrew that the Star had to choose between being a pub or a restaurant.

Black Pudding and Foie Gras picked up its own gong in July when Andrew took the silver medal for best chef book at the Gourmand World Cookbook Awards. The book is a culinary memoir, a love letter to Yorkshire producers and a showcase for many of the dishes that he cooks at The Star Inn. Andrew writes of the childhood influences that made cooking a way of life for him: new foods eaten on trips abroad; rabbit shooting and wild mushroom hunting on his dad’s farm; the combination of flaccid Fray Bentos meat pies and Robert Carrier cookbooks that started him off on a career in kitchens. His real passion, however, is reserved for the ranks of suppliers that he relies on. Andrew’s local network includes Sand Hutton Asparagus, fish from Alan Hodgson of Hartlepool, Ampleforth College Orchard and their own butchers, Pern’s of Helmsley – a loving litany of names and places that reveals his deep attachment to the region. With accounts of cider-making merriment, anniversary parties which the whole village attends and the Star Inn cricket team, it is evident that the Perns are very much part of the community.

And then there are the recipes. While they read very much like an multi-faceted entry on a restaurant menu, they can each be broken down into their constituent parts for the not-quite-as-ambitious home cook. At first glance, a dish like Soused Hartlepool Halibut with Pink Peppercorns and Pickled Shallots, Crushed Pink Fir Apple Potato Salad, Dill Vodka is not something that you’re likely to whip up of an evening at home but soused fish can be prepared a day in advance, the zesty potato salad is an easy addition to any meal and having a bottle of dill vodka in the freezer to accompany any fish dish sounds like a good idea.

I was particularly taken by Andrew’s use of homemade liqueurs. The last chapter in the book, Drinks Cabinet, will encourage any reader to start making their own Rhubarb Schnapps, Gooseberry Gin and Damson Vodka. Other recipes which stand out include a traditional Baked Ginger Parkin with Rhubarb Ripple Ice Cream, Hot Spiced Treacle; Risotto of Felixkirk Organic Beetroot with a Deep-Fried Blue Wensleydale Beignet, Wild Garlic Pesto; and the pure theatre of Whiskey in a Jar. Lots of ideas to enjoy and plenty of dishes to try.

Andrew is to be commended for shining an affectionate light on an area that he has very definitely put on the map for anyone interested in good food. Black Pudding and Foie Gras will undoubtedly serve to whet many more appetites for his cooking at The Star Inn.

Must try: that Baked Ginger Parkin – I’ve never found a good recipe yet – to eat with some Rhubarb Schnapps.

Black Pudding and Foie Gras by Andrew Pern is published by Face. RRP £39.99.