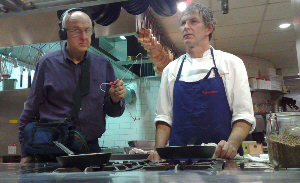 So, we didn’t win last night – but, as my producer said, that doesn’t mean that we aren’t great! An Australian show – The Main Ingredient: New Years Day, which was presented by Kelli Brett and produced by ABC Radio – took the 2010
Le Cordon Bleu World Food Media Award for Best Food/Drink Radio Programme.

Disappointed? Yes, of course. But I’m still fiercely proud of the Foodtalk series and we didn’t do too badly to make it onto a shortlist of seven out of all the food radio shows in the world. Better luck next time, hopefully.