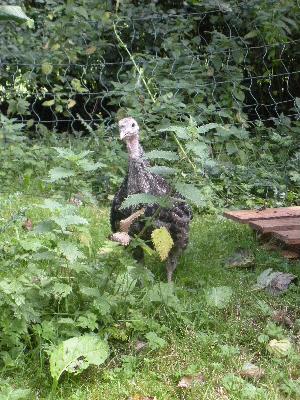 As published as a sidebar to A turkey for the table in the Irish Examiner on 2 October 2010.

Hens are friendly and sociable, welcome you when you bring food and, when allowed to free-range, will take themselves indoors to roost when twilight falls. Turkeys, on the other hand, squawk and try to escape when you approach them – even with their rations – hiss as you clean out their house, and seem unable to find their way home come evening time, standing around like a couple of drunken uncles at a wedding when everyone else has gone to bed. Or maybe that’s just my particular pair of 12-week-old turkeys. But we’ve had them for a month and they still need careful herding into their pen for the night because, of course, they have strolled an average of two meters away and just cannot find their way home.

Any animal that is unable to walk back to its source of food can only be one small step away from extinction – unless some kind human, with absolutely no ulterior motive whatsoever, helps it out. Besides, if turkeys were too intelligent they might turn into pets instead of the centerpiece of the Christmas feast. And that simply would not do.