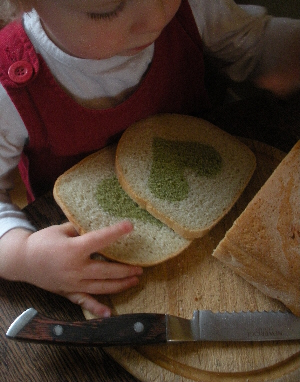 The person behind Doodle Bread is Northern Irish entrepreneur Rose Kane. She’s come up with a simple but very effective kit that enables kids – and their parents – to make loaves of bread that, like a stick of rock, have a colourful design running through them.

Little Missy was stuck in there from the start, opening the box with great glee, pulling out all the bits and enjoying the chance to drag baking bowls out of the cupboard without being told off. I can imagine that an older child would be able to make the bread themselves from start to finish. A 21-month-old might not be Rose’s ideal target market but Little Missy did very much enjoy getting her hands messy in the kitchen. From taking parts of the kit all over the place (there’s a small squisher in there, easily misplaced in a toy basket) to standing on her stool at the counter in front of me to help mix and knead the dough and chanting “dough, dough, dough” for the rest of the day (always good to get a new word), she had a ball. She even developed a new, although ineffective, kneading technique which involves one finger and which she calls the “poke”. You can see her attempted work in the picture below. 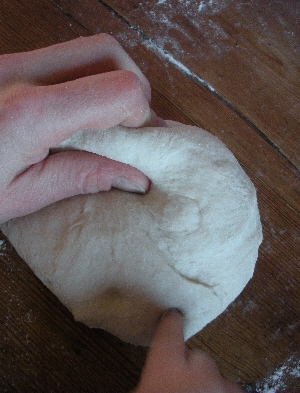 Unfortunately, with all the help, her mother wasn’t quite as on top of things as she should have been and the first loaf was destroyed by me not realising that I had to take the plastic doodle out of the silicone tin before baking. Yes, I couldn’t believe I did it either. It was a melted plastic disaster. And so was the star (or ‘tar’ in LM world), our favourite shape. At least we have hens that ardently enjoy kitchen mess-ups like this.

Thankfully Rose had also included a couple of other shapes in the pack so, nothing daunted, we grabbed the heart, another pack of the bread mix and had our loaf ready to go before LM realised that she was in déjà vu mode. The eventual result? One sweet smelling (much nicer without the odour of melting plastic), fine looking loaf that didn’t sit around the house for long.

Would I recommend it? Yes. It’s brilliantly original, undeniably cute, will definitely get kids into the kitchen and – a big thing for me – instead of artificial additives, uses powdered spinach and beetroot to colour the dough. The Doodle Bread site even has recipes for making your own dough so, when you run out of mixes, there’s no excuse for leaving it sit in the cupboard. Basic kits start at just £15.

LM is a convert. Every loaf of bread that appears on the worktop is “dough, dough, dough” now. I think I’m going to have to try the Chocolate Vanilla next or maybe, if my rosemary bush revives, it just might have to be a loaf of Parmesan and Rosemary.