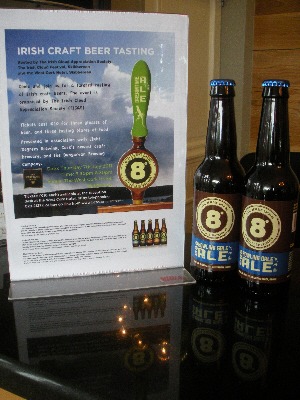 Poster and beer at the West Cork Hotel

Just back from some down time near Union Hall – but I have a good excuse to head west again this week. The Husband and I will be at the West Cork Hotel in Skibbereen on Thursday, 7 July, for a craft beer and food matching evening.

The event is being organised by Sally McKenna of The Bridgestone Guides and is a fundraiser for the Irish Cloud Festival.

It will take place between 6.30pm and 8.30pm and admission is €10. For that, people will get tastings of three different beers, accompanied by three tapas plates.  The Husband will be doing tutored tastings with two beers from Eight Degrees Brewing – our Howling Gale Ale and the Sunburnt Irish Red, making its public debut – along with Black Rock Irish Stout from Dungarvan Brewing Company. I’m there to talk about matching beer with food and we’ve been busy putting together some interesting flavour pairings for the beers that will be available on the night.

The Irish Cloud Festival – the first of its kind – is being hosted by the Irish Cloud Appreciation Society (TICAS) and will feature a cloud conference, a tutored cloud-spotting session, a picnic at the James Turrell-designed Sky Garden of Liss Ard Estate – along with several opportunities to celebrate the best of West Cork food.

Not being at all biased, but with beers like Howling Gale Ale and Sunburnt Irish Red, Eight Degrees Brewing looks set to compliment any kind of cloud spotting…

Eight Degrees Brewing: Howling Gale Ale
Like blitzing down the Ballyhouras on your bike with an icy wind in your face, this delivers a refreshing crisp smack around the gills. It pours a pale golden colour and the malty sweetness is well balanced by the chinook and centennial hops. Goes well with fish, chicken or anything off the barbeque. ABV 5.0%
Suggested food matches: Ales are traditionally seen a great foil for Indian food but we particularly like the Howling Gale with fish and chips. Crisp, with a hint of bitterness, the ale makes sure that spicy or fried food never becomes palate-clogging. It’s also well worth trying with a creamy Cashel Blue and Broccoli Gratin.

Eight Degreees Brewing: Sunburnt Irish Red
Like an Irishman on holiday in the Canaries, this beer has a red tint but with a chilled out, mellow feel. A traditional Irish style with a twist, it has subtle caramel notes balanced with a hoppy aroma. Goes really well with roast beef, lamb or a traditional Irish stew, but beware: keep out of direct sunlight.
Suggested food matches: a platter with mature cheddar cheese – Hegarty’s is good – Gubbeen salami and chorizo, fresh crusty bread, crisp apples and dried figs.There are enough hops here to stand up to the sharp cheese and cut through the richness of the cured sausage. The sweetness of the figs also compliments the caramel notes of the beer.
Lamb – sweet and ever so slightly fatty – is also a good pairing. Make some lamb burgers, with lots of rosemary, and let the Sunburnt Irish Red shine through.

Dungarvan Brewing Company: Black Rock Irish Stout
Bronze Medal Winner at the Brewing Industry International Awards 2011.
The Black Rock is a landmark for mariners at the outermost part of Dungarvan harbour, situated just between the Copper Coast and Helvick head.
This is a full flavoured, smooth, dry stout that has been described on more than one ocassion as “the way stout used to taste”. Made from roasted barley which gives a rich, chocolate-y flavour with herbal hints and notes of vanilla and aniseed. This is a medium-bodied stout with a light carbonation and a smooth mouthfeel.
Ideally this stout should be served in the traditional south eastern way which is ‘off the shelf’ – ie at room temperature. It is the perfect beer to serve with robust meat dishes, or could be used as a ‘dessert beer’. ABV: 4.3%
Suggested food matches: when the weather gets colder, there’s always the traditional beef and stout stew but, for something completely different, hold your stout for the sweeter end of the meal. Make sure you keep the sugar content of the beer and the desert balanced. This smooth stout is good with a dense – not oversweet – chocolate cake or serve it with hunks of blue cheese and oatcakes. You can also use it as a flavouring for truffles or ice cream – Dungarvan’s limited edition oatmeal and coffee stout would be particularly good for this.