It’s all about the (Eight Degrees Brewing) beer 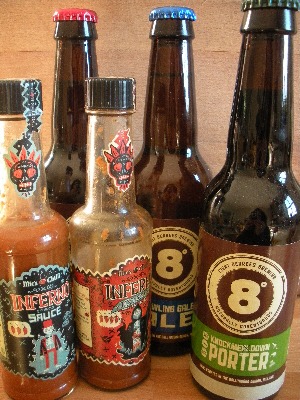 We all – the Husband’s parents are visiting at the moment – gathered around the radio on Sunday morning to hear the Aussie do us proud as he talked about Eight Degrees Brewing on Today FM’s Sunday Business Show.

Also on the show with him was Michael Wejchert of Mic’s Chilli who produces Inferno sauces in Wicklow – his Extreme sauce is much used in this house, as you can see from the photo!

Bord Bia’s Farmhouse Cheese and Craft Beer Weekend is taking place across the country from 27 to 31 October. Eight Degrees Brewing is taking part in two events:

There is more information on all the events along with some beer and cheese pairing notes on the Bord Bia website. Pick up a copy of Glynn Anderson and John McLaughlin’s Farmhouse Cheeses of Ireland (review here) for more information on your own local cheese.

Also check out the IFBA site where we’re currently running a competition to win an Irish craft beer and farmhouse cheese hamper.

The Kiwi will be representing Eight Degrees Brewing at O’Brien Chop House in Lismore on Friday night, 21 October, as part of a Slow Food Feast showcasing local produce and suppliers, in association with Ballymaloe Cookery School. With a menu that includes pigs’ tails, wild wood pigeons and beef tongue fritters, there was nearly war at the cottage when I realised that I couldn’t go. I’m sending the Husband’s parents in my stead, with strict instructions to order all the more esoteric dishes on the menu and bring back a full report! Also featuring will be beef from Michael McGrath in Lismore, Hegarty’s cheddar from Whitechurch and beer from Dungarvan Brewing Company.

If you’re not tied to the house with a feisty angelic toddler and an always-hungry adorable new baby, read this piece about a Slow Food event at O’Brien Chop House in June 2010 and make sure you book a place for the feast at www.obrienchophouse.ie or 058 53810.