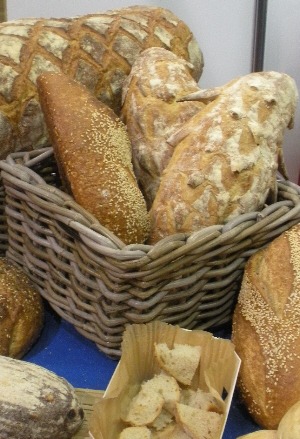 Some of Declan Ryan’s bread

Artisan baker Declan Ryan of Arbutus Bread, and winner of the first Michelin star in Ireland, talks to Caroline Hennessy for SilverCircle.ie about the resurgence of interest in good quality bread and his grandmother’s recipe for brown soda bread. First published in 2009.

Head along to Middleton Farmers’ Market on a Saturday morning and you can’t miss the distinct Arbutus Bread smell. Follow your nose and you will find Declan Ryan’s stall, piled high with fragrant, just-baked brown soda cakes, white ducks, baguettes, wholemeal spelt loaves and sourdoughs. Ryan is always busy, meeting and greeting as he sells and charms, popping bread into bags and baskets or grabbing an empty flour sack to fill for the regulars who take six or seven loaves at a time. Surrounded by eager customers, his wares never last for long.

Before he started baking bread full time, Ryan was the chef-proprietor of Arbutus Lodge Hotel in Cork and, in 1974, was the winner of Ireland’s first Michelin star. Unlike today, it wasn’t seen as much of a triumph and didn’t have much of an impact on the business. “Absolutely none,” laughs Ryan. “It was only reported, grudgingly, in the middle pages of the Cork Examiner.”

Ryan used to make brown soda bread for his appreciative restaurant customers but, as they told him, “it was not ideal for mopping”. With James Beard’s definitive Beard on Bread to hand, he started experimenting with different yeast breads.

The day after he retired from Arbutus Lodge in 1999, he started baking in his garage. However, demand was such that he swiftly outgrew those temporary premises and now the night’s baking is done at a well-equipped industrial unit. Ryan’s one-time hobby has grown into a full-time business, employing eight people, including five bakers, supplying high quality, hand-finished breads to restaurants and delis in and around Cork city.

It’s easy to see how passionate Ryan is about bread. The flour that he uses is the French Label Rouge, a premium – and pricey – product. “We don’t use cheaper flour,” says Ryan adamantly. “We import the Label Rouge through a wholesaler and I have a French baker over every year to show me how to handle that year’s flour, as the moisture levels vary.”

When he started making bread, he had a baker from San Francisco working with him for a month. “He gave me a good grounding in sourdoughs,” comments Ryan, who has kept his sourdough starter going for 15 years. “We feed and use it every day.” Arbutus Bread’s traditional brown soda bread recipe, which he has been using for the past 37 years, comes from his childhood. “My grandmother from Dunmanway made it for many, many years; we were all reared on it.”

In a country with few artisan bread makers and a new-found hunger for real bread, Ryan’s second career has turned into a runaway success. As yet, only nine years into his (first) retirement, he shows no signs of slowing down. With people willing to travel from far and wide to get their hands on Arbutus Bread, long may Ryan’s bread-making passion continue.

Sieve the plain white flour, bread soda and salt together into a large bowl. Add the wholemeal flour and mixed seeds and mix well.

Whisk the black treacle and buttermilk together. Make a well in the centre of the dry ingredients and pour in most of the liquid. Using a wooden spoon (or your hand), stir the ingredients together, adding more buttermilk if necessary to make a loose, slightly sloppy dough.

Pour into the oiled tin, sprinkle with sesame seeds and bake for 60 minutes until the bread is well risen, brown, crusty on top and there’s a hollow sound when you tap the base of the loaf.

Turn out on a wire rack and wrap in a clean tea towel until cold.

Useful Contacts:
Arbutus Bread, Unit 2B, Mayfield Industrial Estate, Mayfield, Cork.
www.arbutusbread.com
My account of a night spent at the Arbutus bakery – and why I’d never quibble at the price of a loaf: Balllymaloe Cookery Course: Week 7: Wednesday