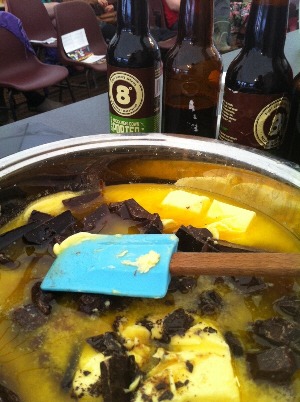 I’m doing a few Irish craft beer demos over the next couple of weekends with the Theatre of Food crew. This weekend I’m off to the Dublin Tall Ships festival with my partner-in-beer, Kristin Jensen of Edible Ireland, and the following Sunday I’ll be at Electric Picnic with Claire Dalton of Dungarvan Brewing Company.

If you’re at any of the festivals, call by to the Theatre of Food tent and say hi. Just follow your nose: when those brownies go in the oven they make sure everyone knows that they’re busy cooking.

Dublin Tall Ships: 6pm on Saturday 25 August
Beer, brownies and microbreweries with Caroline Hennessy (Eight Degrees Brewing/Bibliocook) and Kristin Jensen (Edible Ireland)
Chocolate brownies + beer = a heavenly pair? See what you think! Learn how to savour Irish craft beer, match it with food and use it in baking.

You can also catch Cam, the Eight Degrees Brewing Aussie at EP.

Electric Picnic:  3.45pm on Saturday 1 September
The path to a pint: setting up a micro brewery in Ireland with Cam Wallace (Eight Degrees Brewing)
Cam will talk about the pleasures – and the pain – of turning a random pub conversation idea into the beer that you taste here today: Barefoot Bohemian Pilsner, Howling Gale Ale, Sunburnt Irish Red and Knockmealdown Porter.