Bake me an island: sourdough bread making with Firehouse Bakery 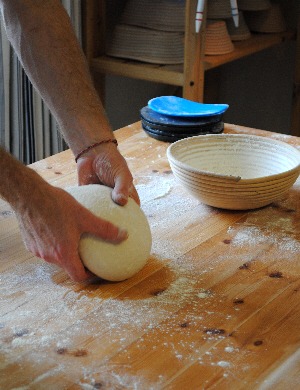 I don’t know what gave us away. Was it the slightly flour-speckled clothes, the air of happy satiety, or the aroma of freshly baked, still warm, sourdough bread that came from our bags? Whatever it was, it elicited a comment from one of the other ferry passengers. “You were making bread, then,” was less a question and more a statement, as we, tired and happy, headed back to the mainland from the sourdough-scented world of the Firehouse Bakery and Bread School on Heir Island.

There’s been a lot happening in the world of bread recently. At this summer’s Theatre of Food, John McKenna tipped sourdough bread baking as one of the most interesting trends to happen in 2012. Thibault Peigne baked his way through the InishFood food festival in May, Arun Bakery is busy converting the masses to sourdough at the Honest 2 Goodness market and woodfired bakeries are no longer something you just read about in international food magazines, with ovens firing up in Cloughjordan (Cloughwoodfired) and Donegal (Slow Food Company).

There’s also one burning brightly on Heir Island, just a five-minute ferry ride off the coast of West Cork. The woodfired oven (built by Hendrik Lepel of Bakehus) in the garden at the back of Patrick Ryan and Laura Moore’s Firehouse Bakery is well used during a day’s bread baking there. We used it to cook thinly crusted pizzas, complete with blisters, bubbles and that heavenly charred flavour, for a pre-lunch snack and our handsome sourdough loaves were baked in the falling heat later in the afternoon.  How to manoeuvre a pizza on to a peel and into the oven – not as easy as it looks! – wasn’t the only thing we learned: Patrick is a patient and inspiring teacher, able to communicate his passion for real bread to students of every level. 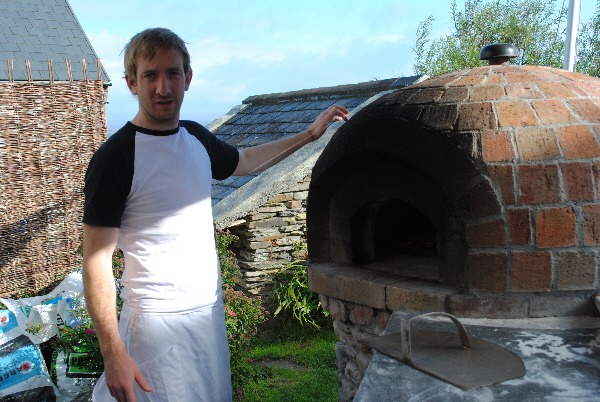 One man and his oven

We were an invited group of six with baking experience that ranged from “not very much” to “five-year-old dormant sourdough starter”. Everyone got flour on their hands immediately as Patrick started us making those sourdough loaves. This is not a sit-around-and-watch demo class. No, it’s a knead-it-hard-type day and, as you observe how the dough changes from rough and ragged to silkily smooth with nothing more than your own (sweaty!) efforts, you’ll never forget how it feels. That’s what you take away from a day at Firehouse Bakery – the skills to make these amazing loaves in your own kitchen, along with an appreciation for real bread. 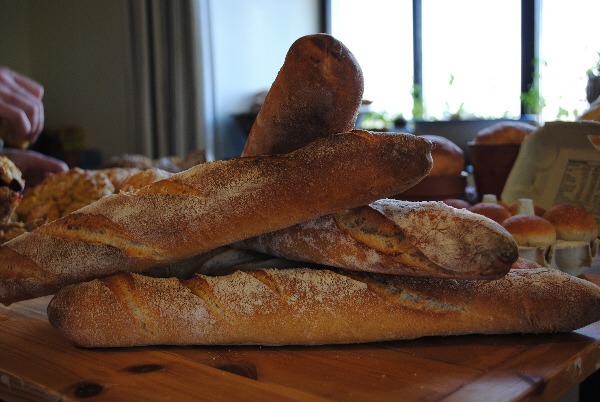 The baguette shaping was, perhaps, more luck than judgement

There were Semi-Sourdough Baguettes – mine might not have been as perfectly shaped as Patrick’s but I was happy! – and mini-loaves of Potato and Rosemary Flowerpot Bread, there were Apple and Cider soda bread rounds with little bursts of caraway flavour and sweet, sticky Maple and Caramel Swirls. It wasn’t just about yeast and soda breads either. There were also little biscuity tartlets topped with strawberries, a deceptively light Guinness Chocolate Cake and toothsome White Chocolate and Raspberry Mini-Muffins. Patrick had us working with dough a lot wetter than I would normally use and kneading for much longer than is usually recommended. In short, we baked our way through an entire day’s worth of savoury and sweet recipes. Even better, we got to go home with not only the fruits of our labours, but copies of the 18 recipes that we had used. 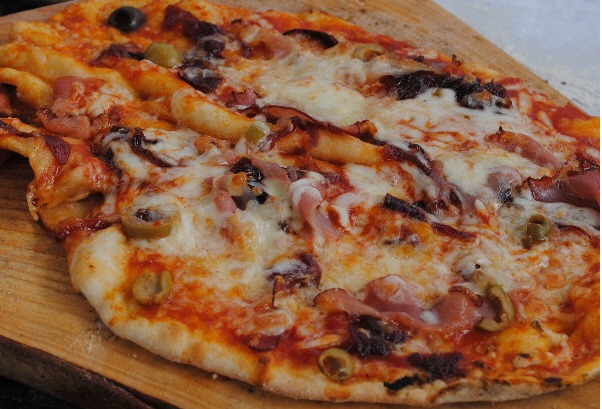 My (ever so slightly rumpled) pizza

For me, a day totally dedicated to baking was bliss. It inspired me to revive my long-neglected sourdough starter last week, using some of the techniques I learned – the amount of time spent kneading, windowpane test, boiling water into a hot pan in the oven – and the result was two intensely flavoured loaves with a crisp, crackling crust. Next step? A woodfired oven to bake them in would be quite useful…

I was a guest of Patrick and Laura at Firehouse Bakery. All photos and opinions are my own.