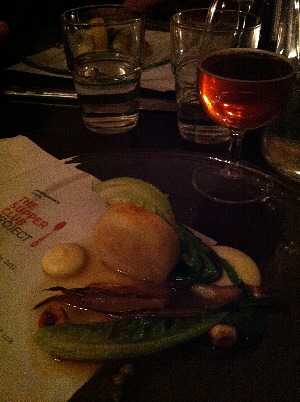 Elegant presentation of the humble celeriac at The Supper Club Project

Take a venue – it doesn’t have to be a restaurant, but decent kitchens make a difference – a limited time span and some nomadic chefs. What have you got? A pop-up-restaurant-tastic November with The Supper Club Project, Seasons Supper Club, the first Merrion Square Supper Club event and the Parlour Games pop-up dinner party all taking place over a few weekends.

After a bit of babysitter finagling, I managed to make it to two nights – The Supper Club Project at Ariel House in Dublin on 2 November and Seasons Supper Club, which took place at Fenns Quay Restaurant in Cork on 16 November.

The Supper Club Project is run by former l’Ecrivain husband and wife duo John Wyer and Sandy Sabek. On the night, John was in the kitchen, Sandy whizzing around front-of-house and John Rock of Kavanaghs was on hand to match Irish craft beer and cider with each course. I was representing Eight Degrees Brewing, Daniel Emerson was there with his Stonewell Cider and Trouble Brewing‘s Dark Arts Porter also made an appearance.

One of my favourite things about this kind of meal is who you meet, especially when you turn up as a solo diner. It was a long night – kicking off at 7.30pm and still to end with the petit four/coffee course as I legged it at midnight to catch the last Luas – but the dining companions at my, thoroughly riotous, table ensured that there were no gaps in conversation.

Over the course of the night, we had eight courses of beautifully cooked food, each paired with a different beer or cider. Daniel told us how his cider is made –  champagne yeast and Jonagold apple juice both play a part – at the start of the meal, I spoke briefly on beer and food matching before the second course (sublime salted beef with Knockmealdown porter) and, as the night went on, the noise in a packed room increased until there were few strangers left. Top dishes? A simple root vegetable, rendered sublime – sweet celeriac, crunchy hazelnuts, grilled lettuce, all drizzled with umami-rich roast chicken juice and paired with Sunburnt Irish Red. A glass of warm chocolate mousse, truffle custard and coffee ice cream was raised to celestial heights by being matched with Stonewell’s effervescent medium dry cider.

Eight courses, including beer and cider pairings, was €65. I was a guest of The Supper Club Project. @SuppaClubProjec

There’s a peep behind the scenes from the following night in this video, including an appearance from the Eight Degrees Brewing Aussie. 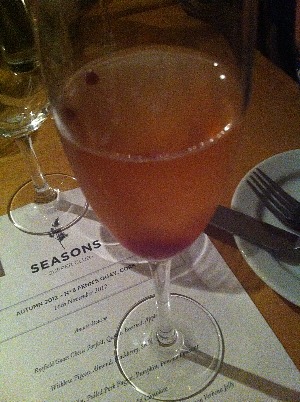 Seasons Supper Club took over Fenn’s Quay for a Friday night meal that was a true collaboration. SSC is Conal Markey and Richard Speedie, who met as contestants on Masterchef Ireland 2011, and they worked with Kate Lawlor of Fenn’s Quay and Nash 19’s Pamela Kelly to feed a happy and crowded restaurant.

Arriving on my own again, I had another end-of-the-table seat. Again, it worked in my favour. A discussion about the venue and its cosy room-to-room layout led to one of my dining companions talking of growing up next door at No 6 Fenn’s Quay, when it was a tenement – one room per family, grim toilet out the back – rather than carefully restored house. It was the kind of conversation that encouraged me to attack the food on my plate with more appetite than usual.

My pick of the night was the pigeon breast which, although I would have eaten it pinker, was still gamy enough to be satisfyingly different. Another highlight was the herby pulled pork faggot disguised as a Brussels Sprout that accompanied the stuffed pork fillet from Crowe’s Farm. At my table it elicited a chorus of “yuck!” until someone realised what was underneath the green exterior. The beetroot fudge that arrived at the end of the night was addictively morish, with sugar enough to keep me awake on the drive home. 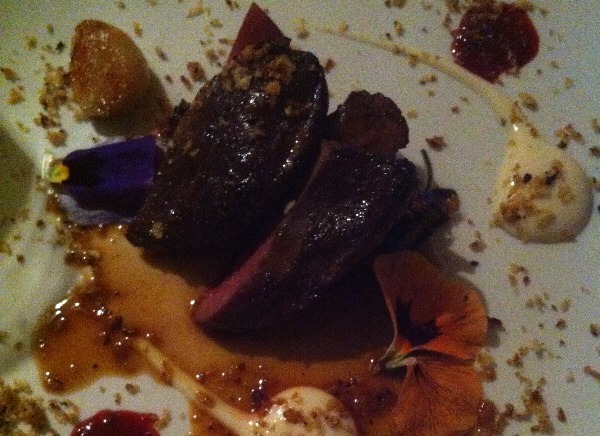 Game for me at Seasons Supper Club