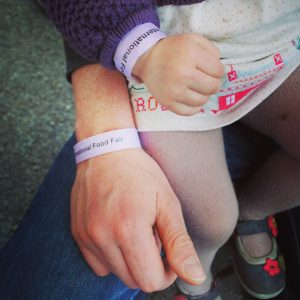 It’s a simple thing: pay a fiver in to the local primary school on a sunny Sunday for a purple wristband, a bowl and fork. Wind your way through the throng in the main hall to fill the bowl with Korean chicken stew and noodles, fried plantain, Lithuanian potato dumplings with wild mushroom sauce – and make sure you top it off with some of the brilliantly green macha cake.

Go outside to eat, leaning against a wall, and starting with the cake, try to figure out the country that each dish came from. Give forkfuls to unwilling girls, small noses wrinkling up at unfamiliar flavours and textures – until they come to the fried ribbon cookies.

Repeat. Several times. Realise afterwards that, despite the amount you ate, you never got to check off all the different national specialties. And that you missed the tea and buns available in the room next door. Resolve to skip pre-Food Fair lunch next year.

This was the sixth year of the Kildorrery International Food Fair and, not being involved in the GAA or church, it is our favourite community activity of the year. There’s no commercial angle; a few events are held in advance for fundraising and the participants – from England, Hungary, Korea, Japan, Lithuania, New Zealand, Nigeria and, of course, Ireland – given enough money to make the food in their own kitchens.

And that’s a feat to be applauded. In 2011, while six months pregnant, I had my entire family turning 10 kilos of mince into 400 lamb burgers at 9am on the (disorganised) day we volunteered to look after the New Zealand stand. Been there, done that, know how hard it is. Respect to all the participants whose hard work will definitely have been sweetened by the feedback they got on the day – I have never had such an appreciative audience for my cooking.

With every small town in Ireland trying to pull off their own food event these days, the Kildorrery International Food Fair is a brilliant example of how food can bring people together, how it can open conversations and celebrate differences. All that for just €5 per adult, €15 per family. Sometimes you don’t need big bucks to think outside the box.

Keep an eye on www.facebook.com/kdyfoodfair for updates and details of the 2014 event. Also check out Cork Billy’s report.