Epic Chocolate, Porter and Potato Cake and a story of spuds 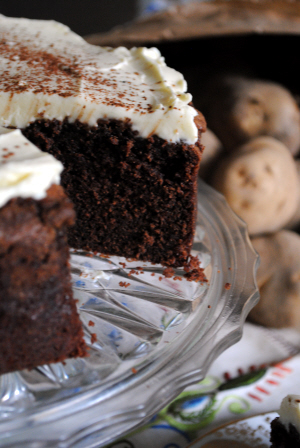 One way of getting kids to eat their mash

I didn’t eat potatoes until I was 30.

Not voluntarily at least.

Like almost every other Irish child I was weaned on milk-and-butter-rich pandy. But it wasn’t too long before I began to assert an early and over-developed sense of self by turning up my nose at that potato purée. And so we waged a war, potatoes and I. The battle lines were drawn. On one side: the spuds, my mother and her fear that I would starve myself to death; the other, a furiously determined, curly-haired little girl.

Night after night, potatoes tasted of bitterness, the stinging salt of tears, as I picked holes in the oil cloth to avoid looking at my congealing dinner plate. My mother did the washing up, my lucky potato-eating siblings already inside in front of the telly. And I had to sit there. It wasn’t a method calculated to make this stubborn child bend.

For years, I avoided Ireland’s favourite vegetable; I had no interest in Kerr’s Pinks nor Golden Wonders. Homeguard and Roosters were but vague names that were invoked around the dinner table at specific times of the year. Ironically, I learned more about potato varieties while doing my Masters on the Great Irish Famine, able to wax lyrical on the merits of cups and Irish apple, the dangers of the lumper monoculture. But I still wouldn’t eat one.

It wasn’t until I was living in New Zealand that my world turned topsy turvey. A taste of tinned new potatoes at a cookery demonstration opened my mind and my tastebuds. Nowadays they don’t have to be tinned, although I’m still a lover of the waxy spud, and I’m fully on board the potato wagon. 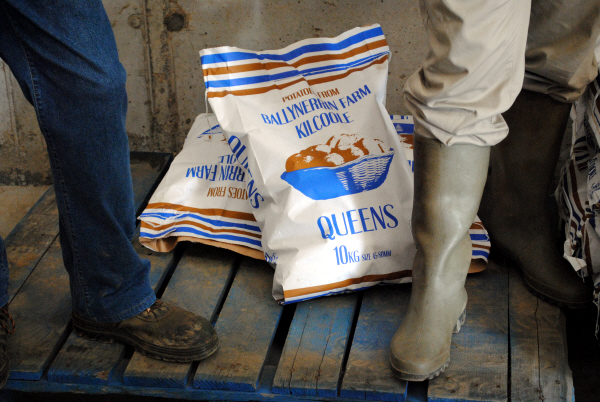 Sacks of Queens from Ballynerrin Farm

Last Friday, Bord Bia took a group of media and bloggers on what The Daily Spud accurately named “a spud school tour.” We stood in blazing sunshine at the Brady family farm, the Sugar Loaf in the background, and listened to brothers John and Paul talk about their loamy East coast soil, the varieties that they specialise in – reeling off the names Homeguard, Premiere, British Queen – and the fact that the 300 acres that they had under potatoes a few years ago has now shrunk to just 140 acres. It wasn’t a sob story. It was a fact. As Irish potato acreage diminishes, so too do the number of people working in the industry.

New season earlies like the varieties the Bradys grow are part of our heritage, part of an Irish terroir. They even – and I wish I could reach back to my tear-stained six-year-old self and whisper in her ear –  taste mighty good.

Watch out for more Irish potato antics, including Keogh’s urban spud fest, on this Friday, 23 August, as part of National Potato Day. More information, including recipes from Catherine Fulvio, at Potato.ie. Thanks to Bord Bia for the spud school tour and the Bradys for the sack of potatoes that successfully I carried around Dublin for the evening. Not a one lost in transit! 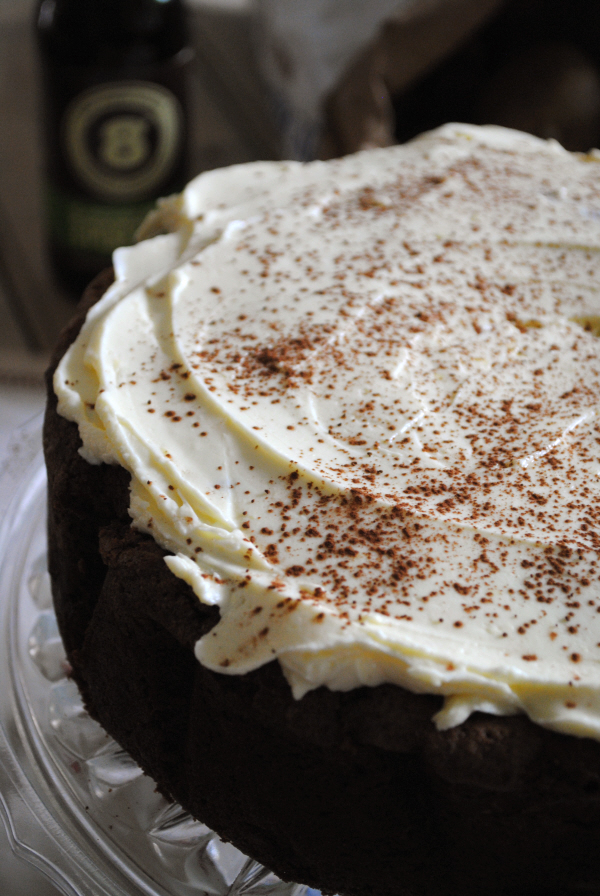 Epic Chocolate, Porter and Potato Cake
This may be one way to get kids to eat potatoes! It’s epic because it makes a substantial, sizable cake that cuts wonderfully. This is a cake that is best made the day before you want to eat it as it very much improves with a little aging.

Melt the chocolate and allow to cool.

Cream the butter and sugars together in a large bowl then add the eggs, one at a time, beating well between each addition.

Mix in the melted chocolate and mashed potato (bet you never thought you’d read that sentence!).

Sift the flour, cocoa, baking powder and bicarbonate of soda together. Gently mix into the cake batter in three additions, alternating with the porter.

Spoon into the prepared tin, leveling the surface with the back of the spoon, and bake for 1 hour – 1 hour, 10 minutes or until the cake feels springy and a skewer comes out clean from the centre.

Cool in the tin for 10 minutes then remove to a cooling rack.

To make the icing, beat the cream cheese and butter together until smooth, then mix in the icing sugar. Spread over the cold cake, dusting with a little cocoa.

Serves 8-10. Or a brewery full of hungry staff, twice over.