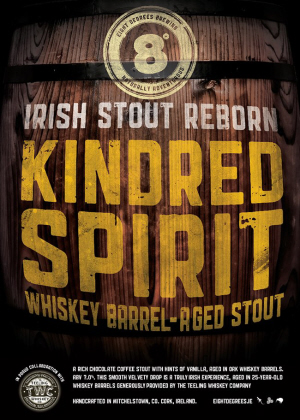 Kindred Spirit – keeping the trade of the cooper alive

By trade I was a cooper, lost out to redundancy
Like my house that fell to progress, my trade’s a memory…
The Rare Ould Times by Pete St John

Our teacher wrote that song on the blackboard, the class reading aloud as his chalk moved across the grey surface. We got stuck at the word cooper so he had to pause and explain. Growing up in Ireland during the 1980s, we clearly understood redundancy, along with the demolition and despair of the next line.

At a presentation by Paul McLaughlin of Kelvin Cooperage, during the recent International Craft Brewing and Distilling Convention in Dublin, that song kept running through my head as he spoke of how his trade is flourishing. I interviewed him for Lyric FM’s Culture File – producer Luke Clancy couldn’t resist adding in Roll out the Barrel! – and he told me how the boom in the craft brewing industry is facilitating this rejuvenation.

I’ve had first hand experience of this. Earlier this year at the brewery, we released Kindred Spirit, a limited edition stout which had been aged in 25-year-old whiskey barrels from the Teeling Whiskey Company. Did they come all the way from the Kelvin Cooperage? I’m not sure, but it’s nice to think about all the lives they’ve lived before they made it to the brewery. Next stop, flowerpots…