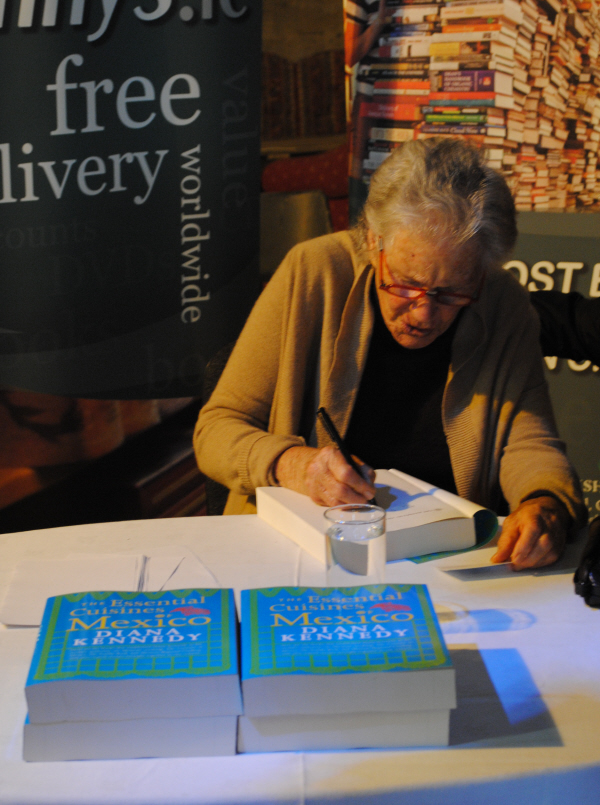 See those books? Gone in 20 minutes.

Ever wondered if a 91-year-old cookery writer can rock? Wonder no longer. Diana Kennedy is that woman.

A small but indomitable lady in leather trousers who visited Ballymaloe for the recent Literary Festival of Food and Wine, she doesn’t suffer fools gladly. Considering what she’s done for Mexican food over the last 55 years, travelling the high and by-ways of that country and bringing the real flavours of Mexico to an audience far beyond that country’s borders, she has every excuse not to.

Her take-no-prisoners reputation precedes her; before I spoke to Diana, the people who had been at her demo told, in hushed tones, of her put downs to errant audience members and I was warned to mind my Ps and Qs.This is, after all, the woman who gave US chef and Mexican food expert Rick Bayless what she called ‘the the bum’s rush,’ abandoning him by the roadside after he irritated her.

I witnessed her sitting patiently in a draughty shed-turned-bookshop, in front of the last remaining copies of her Essential Cuisines of Mexico, knowing that if the author was there, the books would sell.  And they did. She’s persistent, knowledgeable, extremely opinionated – and incredibly charming. It’s no wonder that Lily Ramirez-Foran calls her Doña Diana. Just don’t ever question the right of this Essex-born nonagenarian to write about Mexican food, sonny boy.

I wasn’t the only one following Diana around with a mic at the Ballymaloe Litfest. It sounds as if Dan Saladino also survived interviewing her for the BBC Food Programme. Listen here: Mexican cooking and the food adventures of Diana Kennedy