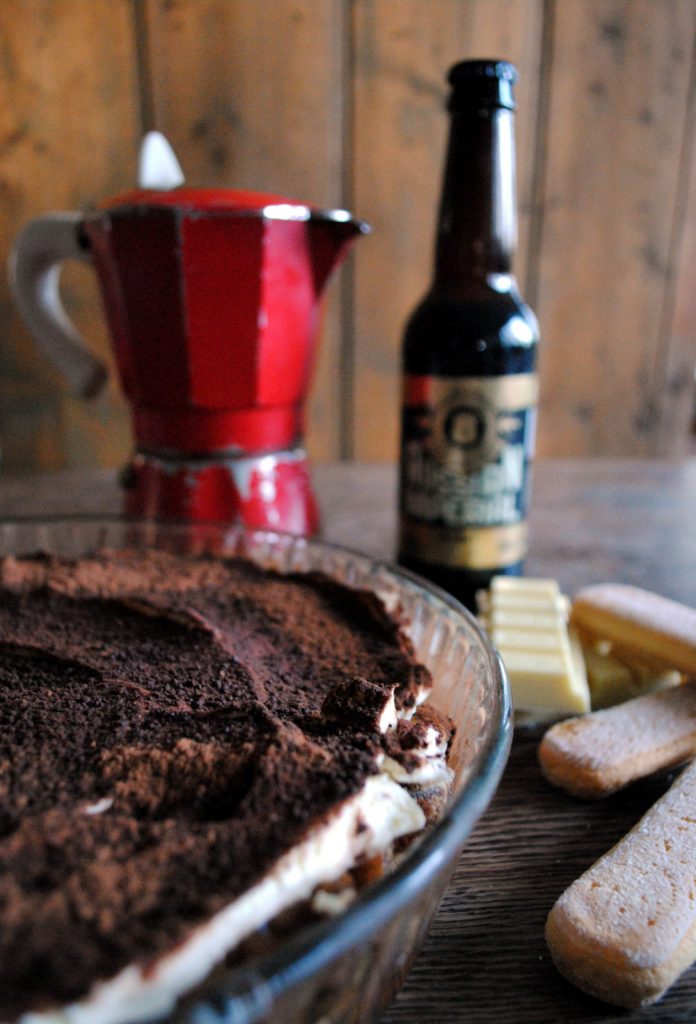 Coffee, stout and white chocolate – what’s not to like?

Sometimes when you taste a beer, you just know what it’s destined for. Rich and smooth, with complex coffee and cocoa flavours, one sip of Russian Imperial Stout from the lads at the brewery and I knew I was heading straight to tiramisu territory.

White chocolate tiramisu, to be precise.

During the summer I became ever-so slightly obsessed with the White Chocolate and Pistachio Tiramisu from Sharon Hearne-Smith‘s brilliant No-Bake Baking (Quercus Publishing). It’s a no-fuss recipe, no palaver with separating eggs – my baking bête noire, I hate beating egg whites or having them left over afterwards – and, best of all, it’s a make-ahead desert which improves with time.

I made many iterations of this caffeine and alcohol-soaked dish during the summer, tweaking the recipe slightly, and knew I was on to a winner when it became designated “too good for visitors” in my mother’s house. Come colder weather, and I didn’t think of tiramisu so often as my mind ran to free-form fruit tarts and shortbread and Christmas baking. That’s until I got my hands on the Russian Imperial Stout. Tiramisu was, undoubtedly, back on the agenda.

Is it good? Just think: sponge fingers, soaked in a bittersweet coffee and beer syrup, layered with a rich white chocolate mascarpone cream. Myself and the Eight Degrees Aussie nearly polished it off after dinner one night last week, accompanied with a few bottles of the Russian Imperial Stout. But we did save some, just a little, for the rest of the lads at the brewery.

White Chocolate and Imperial Stout Tiramisu first thing in the morning? The breakfast of Russian kings.

White Chocolate & Russian Imperial Stout Tiramisu
I use Eight Degrees’ Russian Imperial Stout in this but it’s also good with other rich porters and stouts. White Gypsy also do a Russian Imperial Stout which I’d bet would be fantastic in this recipe. A few Irish seasonal favourites to try are:
– Carlow Brewing Company’s Leann Folláin, especially if it’s been aged in Irish Whiskey barrels
– St Mel’s Raisin and Oatmeal Stout
– Beoir Chorca Dhuibhne’s Riasc Black (for those who like blackberry in their tiramisu)
– Dungarvan Brewing’s Coffee and Oatmeal Stout
– Shanco Dubh from Brehon Brewhouse
– Independent Brewing Company’s Whiskey Stout
– or, if I could ever get hold of it in bottles (do you hear me, Trouble Brewing?!), Dash Away Cherry Chocolate Stout.

Place the stout, coffee and sugar into a saucepan over a medium heat. Stir until the sugar has dissolved and simmer for 3-4 minutes until reduced by one-third. You should have approximately 300mls of liquid. Stir in the coffee liqueur and pour into a shallow bowl.

Break up the white chocolate and put it into a glass bowl with 50mls of cream. Sit it over a saucepan of gently simmering water, making sure the base of the bowl doesn’t touch the water. Or use the microwave. Melt, stirring occasionally, until smooth. Leave to cool.

Put the remaining 200ml cream, mascarpone and icing sugar into a large bowl and whisk until combined and the mixture has the consistency of thickly whipped cream. Fold through the cooled chocolate and cream.

Dip the sponge fingers into your coffee-stout mixture, turning, so that they end up soaked without being soggy. Line the base of your serving dish with half the fingers and then spread over half of the creamy chocolate mixture. Repeat the layers, using up all the coffee, and finish with a creamy layer. Dust with cocoa powder, cover and chill for a at least 4 hours or – even better – overnight.

I served this with Russian Imperial Stout which was good but, at 9%, it’s almost too rich against the mascarpone. Next time – because there will be a next time – I’d try pairing it with some Knockmealdown Stout.