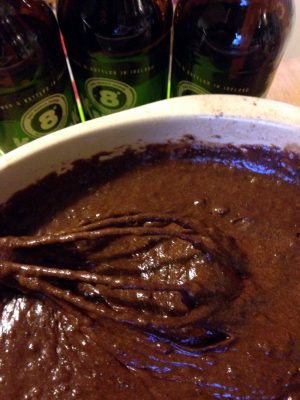 A vat of brownie batter

What are you doing on Tuesday? Yes, this Tuesday, 3 February.

Will you be anywhere around Galway – or can you make it there?

Sign up for the Foodie Forum at GMIT, an day-long event that will be both educational and collaborative, showcasing the best of Irish craft food and drink producers. There will be a range of workshops from chefs like Kevin Thornton, JP McMahon and Bryan McCarthy, Timmy McCarthy will bring hunks of meat from McCarthy’s of Kanturk, an aphrodisiac oysters talk from Diarmuid Kelly while Patrick Ryan (Firehouse Bakery) will be running the live artisan bakery and talking about Real Bread Ireland.

It’s been held alongside the Gastronomy West Symposium, which includes speakers like John McKenna (Guides.ie), Hans Wieland (The Organic Centre) and Brendan Allen of Castlemine Farm.

Kristin and I will be there, Sláinte: The Complete Guide to Irish Craft Beer and Cider in tow, as we host an interactive event in the IQ Bar (lower ground level), which has been turned into Irish craft beer and cider central for the day:

Sláinte! Savour, Match, Cook with Irish craft beer and cider
A revolution is happening in Ireland, with craft beer and cider producers and enthusiasts seeking to transform our drinking habits. With light-hearted expertise, Caroline Hennessy and Kristin Jensen, authors of Sláinte: The Complete Guide to Irish Craft Beer and Cider, guide you through savouring Irish craft beer and cider in its own right, matching it with food and using it in cooking. There will be tastings and (whisper it) there may even be a few Double Chocolate Porter Brownies from the vat that I made this evening.

Just to whet your appetite…