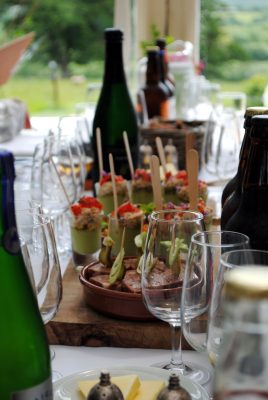 Cider and food at Longueville House

‘Tis the season of mist and mellow fruitfulness. That means it’s time for the apple growers and cider makers of Ireland to get their cider presses up and ready for the runnings of the 2015 vintage.

Last summer, I took a walk around the orchards at Longueville House, a historic country house hotel and restaurant just outside Mallow in North Cork. Michael, the late father of current Longueville House custodian, William O’Callaghan, was the man who planted the apple trees – but not for cider. Oh, no.

There aren’t many Irish craft ciders that started as a by-product of apple brand but the tart, tannic Longueville House cider, a drink that works wonderfully with food, is that one.

Try it with, and in, this recipe: Slow Cooked Beef with Irish Cider

Get more information on Longueville House and the cider at www.longuevillehouse.ie. For more Irish craft cider, check out www.CiderIreland.ie for a list of producers.