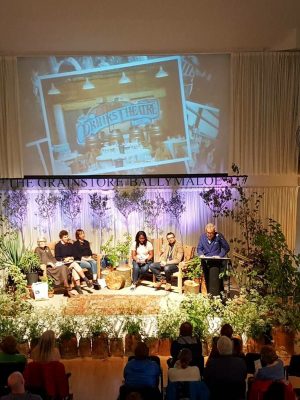 We came, we learned, we ate, we caffeinated ourselves (regularly), we danced our legs off, we were challenged, inspired, motivated: #Litfest17 or, more precisely, A Food and Drinks Literacy Festival at Ballymaloe, was a full-on, fabulous weekend.

During the closing remarks on the Sunday night, festival director Rory O’Connell made an announcement. It’s time to take a break. Acknowledging that the festival has been ” physically, emotionally, philosophically and financially” demanding, he said that there will be no Litfest in 2018 but, after a year’s break, it will return in 2019.

Going back to the end of the very first Litfest in 2013, when I interviewed both Rory and Darina Allen, the initial plan was to have a biennial event, gathering people and energy together every second year. But the momentum was too strong and we, as participants and audience, were gladly swept up in five years of amazing festivals. I’ve been proud to work at Litfest every year, whether it’s been MC-ing the Big Shed demo stage, running the Cookbook Chronicles in the Garden Tent, holding Drinks’ Theatre panel interviews and discussions on beer and cider or talking food blogging in the Grainstore.

It’s been a blast; I’m looking forward to hearing the plans for 2019.