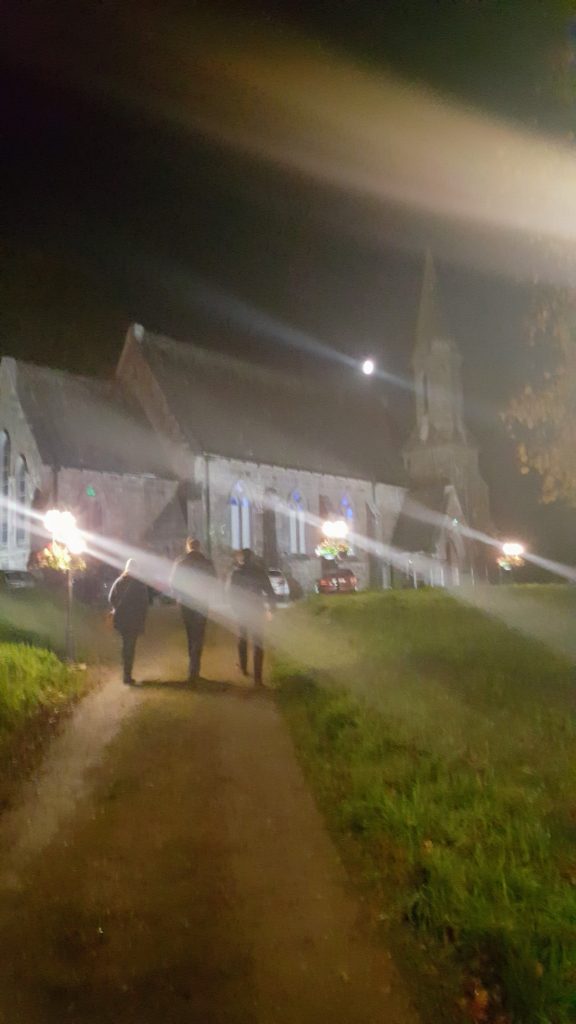 When I did a drop off in Kilfinane on Thursday, I met Mike who had flown from Sydney to pick up a Hearsay Audio award for his A Nightmare before Christmas. Friday evening, at the festival opening, I was sitting next to a couple of Belgian girls who had come over for a performance of their WW2 mystery story, The Space Between.

A nice chunk of Saturday afternoon was spent lying prone on an airbed for an audio nap helmed by Kaitlin of US podcast The Heart. Sunday afternoon, I sat down in O’Céilleachair‘s pub with a couple of radio people from Prague.

People travel from all over the world for Hearsay, the international audio arts festival that’s run on a wing, a prayer and a lot of local goodwill in Kilfinane. It’s a small rural town in County Limerick, with an outdoor education center (its main claim to fame before this), a hostel and a determined man, Hearsay founder – and Grey Heron maestro – Diarmuid McIntyre.

It also happens to be the town that I grew up in, which adds an extra layer of childhood memory across the spaces of the festival – sitting with headphones in the hair salon where I went to get my mad curls chopped, heading to my secondary school for that nap, meeting up with Sr Patricia, my camogie coach, while coming out of the in the convent chapel from Eric’s Nuzum’s talk on Story, Character and Voice.

This year I was enormously proud to be on stage in the Old Church on Saturday night, presenting An Audible Tasting with Eric Nuzum and Jesse Baker of Audible – matching their original audio with local beers from Eight Degrees Brewing (disclosure: I also work with EDB).

The hometown girl with (practically!) hometown beer. More about that event below.

After each Hearsay, I leave Kilfinane inspired and energised and newly aware of the possibilities of sound – having caught up with old friends, made new ones and with a long list of audio to investigate. Each time, I leave in awe of what Diarmuid and the hardworking Hearsay crew have pulled off.

Each time, I leave at the end of the weekend – reluctantly – but looking forward to the next Hearsay.

Save the date: #HearSay19 coming on 4-7 April 2019. Eighteen months to recover from #HearSay17 & plot your next @HearSayFestival adventure! pic.twitter.com/qhcbf48xc3