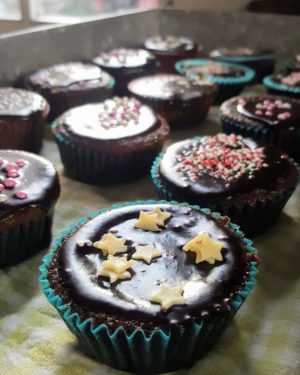 While theoretically I’d like to be a bit more organised, this baking normally tends to happen in a very haphazard way the night beforehand. In between discovering missing ingredients at the last minute and juggling dinnertime with baking time,  I’ve learned a few things:

This time round, it was the Small Girl’s turn to bake. This easy, one bowl, no-creaming-necessary recipe originated some years ago from The Pioneer Woman Cooks and is the fastest thing that you can get into the oven during that gap between coming home from school and getting homework done. The Small Girl wanted to mix it up a bit, so we scrounged on the top shelf and found a few broken Oreos and some random Rolos to bake into the batter. Making it in fairy cake format – although we have to call them cupcakes at the cottage, an unexpected issue arising from Little Missy getting obsessed with Netflix’ series Sugar Rush – means that they’re in and out of the oven quickly and they cool faster than one sheet cake would.

That evening, just after dinner, we dug out ALL the sprinkles, and  placed them very carefully and thoughtfully on top of this super-glossy icing, an acquisition from famed American chocolatier and baker Alice Medrich. Half went into school, a quarter went off to the brewery and those last few lonely cupcakes? They didn’t last long! 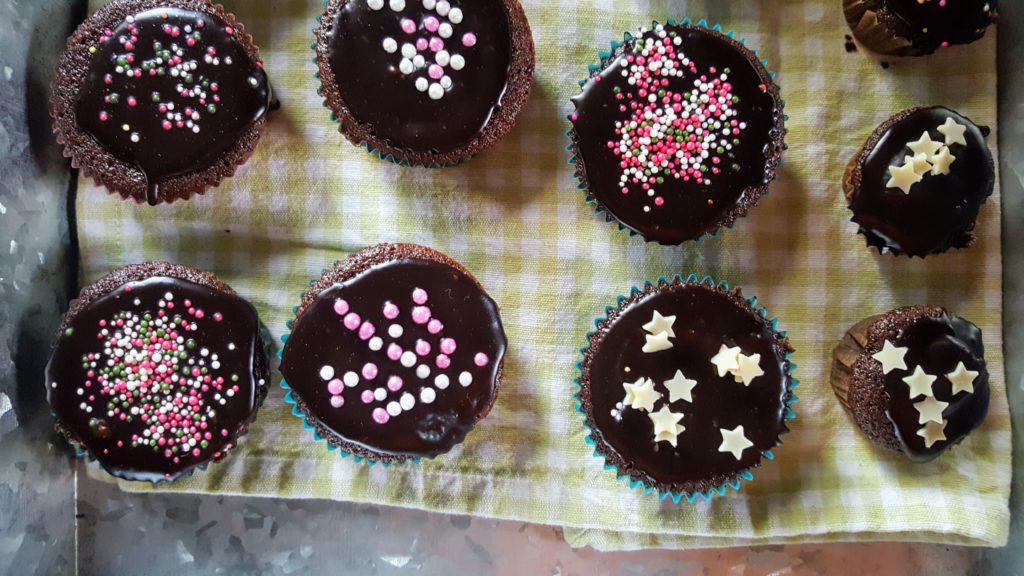 Chocolate fudge cupcakes
Cupcakes adapted from Ree Drummond at The Pioneer Woman, icing from Alice Medrich. The icing will make more than you need. Put it in a jar and store in the fridge. You’ll thank me later, when you warm it up and drizzle it over ice cream, brownies, cake, the last cupcake that you stashed behind the baking bowls…
Makes 36 cupcakes.

Chocolate fudge icing
75g butter
150g caster sugar
75g cocoa (if I don’t have cream, I sub in milk. Not as luxurious but still damn good.)
175ml cream
¼ teaspoon salt
1 teaspoon vanilla extract
As many sprinkles as needed. (Depending on your child’s viewing preferences, this may be legion.)

Whisk the plain flour, caster sugar and salt together in a large bowl. Mix the buttermilk, eggs, bread soda and vanilla in a measuring jug.

Melt the butter in a large saucepan over a medium heat. Add the cocoa, stirring well, then pour over the boiling water, whisk and boil for 30 seconds. Remove from the heat.

Tip in the dry ingredients and stir briskly to cool. Wait a minute, then pour in the egg mixture. Stir well, then divide the batter between the bun cases.

If using the optional add ins, top the cupcakes with broken Oreo cookies or / and push a Rolo sweet into the centre of the batter.

Cook in the preheated oven for 10-12 minutes or until a skewer inserted into one of the cupcakes comes out clean.

Meanwhile, make the  chocolate fudge icing. Place the butter, sugar, cocoa and cream into a small saucepan. Melt, stirring constantly, over a medium heat until just starting to bubble. Remove from the heat, add the salt and vanilla and allow to cool until it’s the right thickness to ice the cupcakes.

Spread thickly, sprinkle liberally. And don’t let the kids take them all to school.