Back in 2010, Kristin Jensen of Edible Ireland and I started working together to set up the Irish Food Bloggers Association. It was a time when the world of food blogging in Ireland was still very small – think about 30 blogs in total – with everyone reading and commenting on each other’s blogs and starting to meet virtually through the early days Twitter.

Enjoyable as those virtual friendships were, nothing compares to talking to like minded people in real life.

Kristin and I, two freelancers working from our homes at different ends of the country, spent much of our time being stuck in front of the computer and working on our own. We had a selfish reason for setting up the IFBA: having met and hit it off immediately at a Bord Bia blogger event earlier that year, we wanted an excuse to see each other more often, we could see the real value in bringing more of these virtual relationships into the real world. We also wanted to promote Irish food, small Irish food producers and food blogging in Ireland. That was way, way back in the days when no one knew what a blogger was and we hadn’t all turned into such self-promoting strumpets!

We launched at Savour Kilkenny’s Food Camp in 2010. In 2011, we returned to talk about what had happened in that first 12 months. That event was particularly memorable for me: I was accompanied by a five-week-old Small Girl who was intent on making her voice heard so it ended up being the first time I gave a presentation to a room of people while breastfeeding. 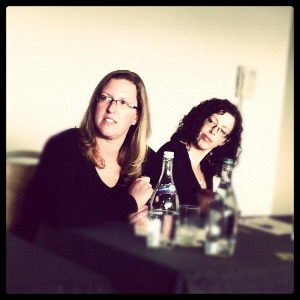 We pulled together a newsletter to let people know what was happening and maintained a busy website, which we envisioned as being a hub for Irish food bloggers, with a blogroll of all the food blogs in Ireland (at the time) alongside information about events, meet-ups and other food-orientated happenings. It was all about making this crazy new world of food blogging as accessible as possible to anyone who was interested.

The IFBA took off like a rocket. We also organised get togethers and workshops, cook offs and competitions, got stuck into the start up of a food festival and met incredible people who were as passionate about sharing recipes, reviews, cookbooks – and food – as we were. 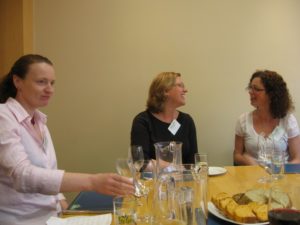 Suddenly, however, we were on the PR radar and we had to make a decision: did we want to continue and become a conduit for people who wanted to “target bloggers” or did we want to sidestep the increasingly commercial world of food blogging? We never set up the IFBA, or our own blogs, to make money. That said, we couldn’t afford the increasing amount of work time needed to keep on top of all the requests that came into the Association.

In 2015 – after writing a book together! – Kristin and I made the decision to let the IFBA go and the following year, prompted by attacks on the site, as well as the cost of hosting and renewing the domain, took down the webpages.

Lest that leave too big a gap in our lives together, in 2018, we came back to work together for another food community: Kristin was appointed Chair of the Irish Food Writers’ Guild (the IFWG, for those who love acronyms) and I became her secretary. We’re about to host our first IFWG Awards lunch this week and many of those attending will be people that we first encountered during the early days of the Irish Food Bloggers Association.