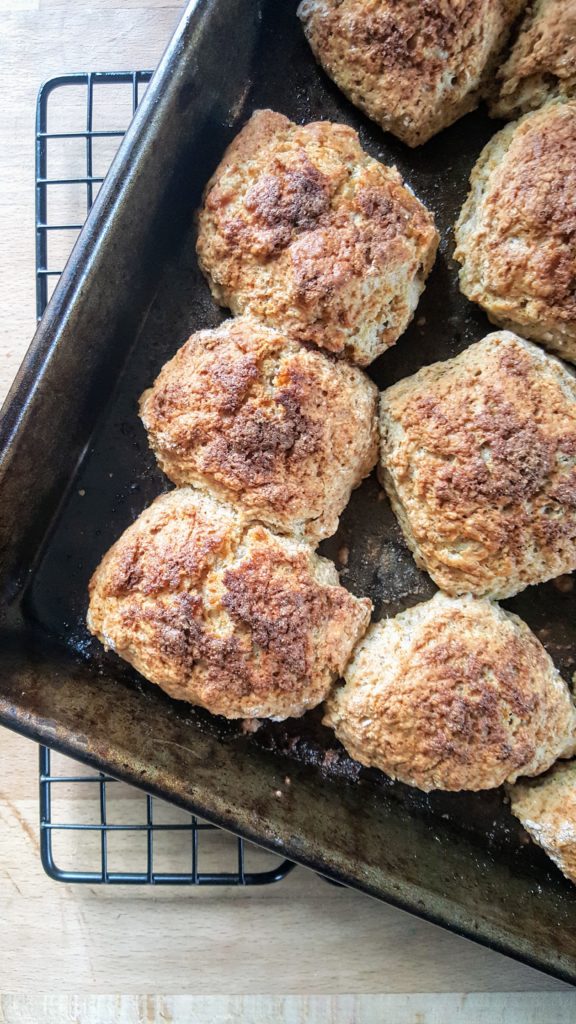 While my first port of call in an crisis would often be the comfort of cinnamon rolls, when there’s no opportunity for yeast to take its sweet time, these cinnamon sugar-topped scones are a very satisfactory – and speedy – substitute.

They’re also useful if you can’t get your hands on yeast and they’re good tempered enough to put up with a bit of messing around in the flour department.

Instead of using 450g plain flour, use 250g plain flour and make up the extra 200g with wholemeal, spelt, rye or buckwheat. Each flour will give the scones a slightly different character and flavour.

Cinnamon sugar topping
2 tablespoons demerara sugar / any sugar that you have on hand + 2 teaspoons ground cinnamon, mixed together

Preheat oven to 220C. Butter and flour a baking tray.

Whisk the flour, sugar, baking powder and salt together in a large bowl. Rub in the butter until it looks like breadcrumbs. In a jug, whisk the eggs and milk together. Tip into the dry ingredients – reserving 2 tablespoons – and mix gently together. Tip the dough on to a floured worktop, form into a rough square and roll until 2.5cm thick. Using a large floured knife, cut into 16 pieces.

Bake for 10-12 minutes until golden and well risen. Cool on a wire rack or devour immediately with butter and raspberry jam.