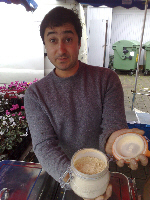 On Newstalk 106-108fm tonight at 9.30pm the third of my radio shows on food – Foodtalk: Spices – will be broadcast. This was one of the real wild cards of the series. Most of the other categories were easy to figure out: Livestock was a given, as was Dairy and Seafood. Being interested in foraging and gardening since childhood, and doing plenty of that at the cottage, Wild and Garden were also easy areas to work in, but Spices was an area that just came out of the blue.

I was thrilled to hear the first Foodtalk on Christmas Day at 1.30pm, just as we were basting the turkey, making gravy and chopping vegetables for dinner.That programme – very topically – was on Livestock, focusing on Irish pork. Jacque Barry (Jacques Restaurant) talked about her love of good quality ingredients and food eaten with family while Fingal Ferguson of the Gubbeen Smokehouse explained how the cycle works on the Gubbeen farm in West Cork – the pasture is eaten by the cows who produce the milk for the cheese, the whey of which is fed to the pigs who are turned into the best pork, sausages, salami and chorizo by Fingal.

…and another door opens

Don’t forget to tune in to my first Foodtalk programme on Newstalk 106-108 fm which will be broadcast today at 1.30pm. Happy Christmas!

On Monday night we launched Foodtalk on Newstalk at Thornton’s Restaurant on Stephen’s Green. It was great to see so many of the people that I interviewed on my trips around the country there – Fingal Ferguson came armed with cheese and lots of other Gubbeen goodies, Green Saffron‘s Arun Kapil had plenty of spices to smell and taste (just put me near his fennel seeds and watch them disappear!), while the Murphy’s Ice Cream boys – Kieran and Sean – turned up with a selection of ice cream snowmen which had us oohing and ahhing in delight before we dug in and promptly demolished them.

It started with a phone call in the early summer. The brothers behind Soundsdoable wanted to know if I was interested in working with them on a series of radio documentaries about food. I didn’t need to be asked twice. It was the start of an intense and fascinating time – journeys around Ireland in all kinds of inclement Irish summer weather to interview a variety of producers and chefs and the chance to record with chef (and fellow blogger) Kevin Thornton.