The Book of Sweet Things by Seán and Kieran Murphy 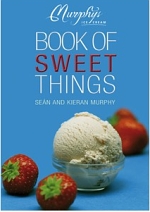 It was only a matter of time before Kieran Murphy’s entertaining Ice Cream Ireland made it to the printed page. The Book of Sweet Things, written by Kieran and his brother/business partner Seán, tells the story of how two Americans got into the ice cream business in Dingle a few years ago. Now Murphys’ Ice Cream is sold from two shops – one in Dingle and the other in Killarney – and their distinctive blue and white containers are stocked in delis and foodstores throughout Ireland. I got my first taste of their wares by picking up a tub of vanilla (or fanaile) in Morton’s of Ranelagh; now, fortunately, I’m never too far from a freezer-full of varieties at work in Urru.

Lacking my once-easy access to a variety of shops, providing me with a large assortment of ingredients to play with, these days I tend to concentrate on the products available in Urru and have also become a habitué of my local health food shops. After finding some cacao nibs in The Granary (Mallow) and picking up a bag of buckwheat flour from Horan’s Health Store in Fermoy, I decided to make a batch of Alice Medrich‘s Nibby Buckwheat Butter Cookies that had come to my attention through 101 Cookbooks.

Super Natural Cooking: Five Ways To Incorporate Whole and Natural Ingredients into Your Cooking by Heidi Swanson (Ten Speed Press)Blogger, photographer, graphic designer and passionate cook Heidi Swanson demystifies unfamiliar health shop ingredients in Super Natural Cooking, a cookbook that drags the world of whole foods very firmly into the 21st century. Nothing is complicated, all is creative and original and Heidi is an encouraging teacher. This is a satisfyingly chunky book, designed with love and attention to detail. Must Cook: Giant Crusty and Creamy White Beans with Greens

A trip to Carlow with the Bridgestone Irish Food Guide

The new Bridgestone Irish Food Guide didn’t see the Husband and I wrong on a brief trip to Carlow this weekend. Just released, it is a compendium of food producers, delis, markets, cafés and restaurants up and down the length and breath of the country. This is Sally and John McKenna’s eighth edition – the last one was published in 2004 – and it is a lovely chunky book, rammed full of great eating and an essential companion for any trip in the country.

Do / Return to Ireland

Listening to Winter Food the other day I heard an interview with Sean and Kieran Murphy of Murphy’s Ice Cream in Dingle. They take presenter Clodagh McKenna through the making of their fabulous ice cream, telling her about local milk, flavourings and types of ice cream (Mango and Chilli – is that exported outside the Kingdom?!), taking her into a freezer room piled high with their produce – brioscaí (Cookies and cream), caramal (Honeycomb), bó bhán (Irish cream liqueur), fanaile (French vanilla) – and treating her, much to Clodagh’s delight, to sú craobh or Raspberry Sorbet. And don’t forget their seacláid – “chocolate, always chocolate’, as Kieran says several time during the interview. No secrets where his heart lies, especially if you check out his blog at Ice Cream Ireland and his decadent recipe for Hot Chocolate.