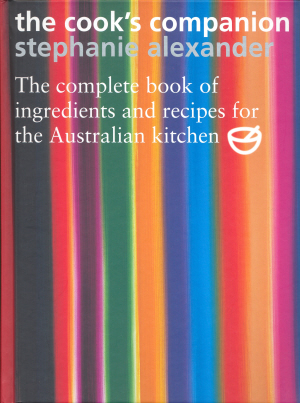 The Aussie and Kiwi kitchen essential

Another four Savour New Zealand classes down and we’re now at the end of what was truly a magnificent weekend. Today I started with A Well Seasoned Appetite (Darryl Maffey and Simon Gault), afterwards wandering into Cooking the Catch with Al Brown of Wellington’s Logan Brown restaurant. We broke for lunch at 12.15pm – not that too many people could have been hungry at that stage after spending the morning eating tasters from the demonstrations! – and then my afternoon was spent at Stephanie Alexander‘s presentation, The Kitchen Garden, and Anthony Bourdain‘s opinionated lecture about French food, Charlie Trotter, roasted crispy pig tail and the evil clown that is Ronald McDonald– a very loose interpretation of the Classically Inspired title of his session.

Although I got to eight classes over the weekend, there were another eight that I would have loved to attend, particularly the fascinating-sounding wine events. At this rate I might even have to make sure that I’m in the country for Savour New Zealand 2007.

Most inspiring presenter: Stephanie Alexander with her absolute passion for and belief in the importance of bringing a programme of gardening, cooking and eating to children at primary school level.

Most entertaining presenter: Undoubtedly Anthony Bourdain. He is a showman and agent provocateur extradionaire and one of his best quotes, during a debate about healthy food, was: “I don’t see my body as a temple, I see it as an amusement park.”

Most frantic class: A Well Seasoned Appetite, presented by Darryl Maffey and Simon Gault who got through an impressive, if hasty, total of ten Spanish and Italian dishes in just 60 minutes.

Things I learned over the weekend: a new method of steaming salmon on a bed of rosemary (Patricia Wells – Bistro Cooking); how to prepare a paua steak for cooking (Al Brown – Cooking the Catch); how wet a Pain au Levain dough should be before you start kneading it (Dean Brettschneider – Knead the Bread); that you should check the temperature of chocolate with the bottom of your lip instead of your tongue, although you should use a thermometer for preference (Richard Hingston – Craving Chocolate). Oh, and that if Anthony Bourdain had to choose between Gordon Ramsey and Jamie Oliver as a cellmate, he’d pick Jamie “because he would make a fine-looking girlfriend!” (Anthony Bourdain – Classically Inspired).