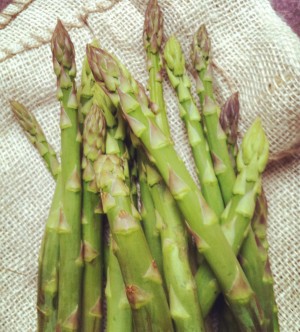 Local asparagus – worthy of becoming a meal in itself

Asparagus is very much in season at the moment in New Zealand with signs hanging by the roadside offering freshly picked spears of this gloriously upright vegetable and quantities of it available in greengrocers. Despite the plenty, I must admit that the Boyfriend and I have been slow off the mark this year and have only had a couple of feeds of it – so far. We need to hurry up and feast before the season ends.

Our favourite way of preparing asparagus is to simply roast the slim spears with butter and parmesan until it tastes good. When I saw the my first bunch of the season at the Saturday market in English Park, its fate was sealed. It was during a weekend when the Boyfriend was at a conference and I had that purchase earmarked for a decadent solo supper. A loaf of ciabatta from the organic vegetable stall and I was all set.

That night I luxuriated in, for once, having an abundance of asparagus to eat. Not having to share was definitely an advantage! I used the ciabatta as a scoop for all the buttery juices, rendering cutlery obsolete. Fingers were definitely made before forks for this dish. Matched with an assertive Sauvignon Blanc from Marlborough, my Roasted Asparagus had a short, but delicious life. This is such an effortless dish I’ve not bothered to give measurements in the recipe below. You alone will be the best judge of how much parmesan and butter you would like – but it is difficult to have too much.

Trim the ends of the asparagus spears by bending them and they will break naturally at the point where they become tender. Place into an oven-proof dish where there is enough space for all the asparagus to lie flat.

Dot with butter and grate a little parmesan over. Place in the oven. Check after 5 minutes and, using a vegetable peeler, cut some thin slices of parmesan to lay on the spears. Roast for about 8-10 minutes in total until tender.

Serve with some soft ciabatta or focaccia to mop up the parmesan butter and a good glass of Marlborough Sauvignon Blanc.