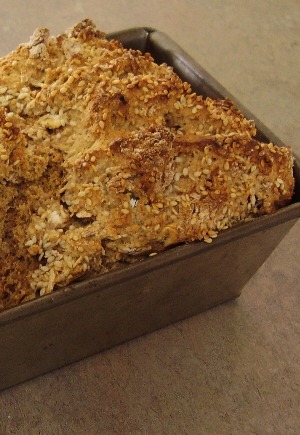 Published in The Press, Christchurch, on 13 October 2005.

Ask an Irish emigrant what they most miss from home and it’s a sure bet that Brown Soda Bread will figure somewhere near the top of the list. A simple wholemeal loaf, leavened with bicarbonate of soda rather than yeast, it – together with its slightly more elegant sister, White Soda Bread – was the staple for generations of Irishmen and women before the arrival of the shop loaf. Even then, people still made it regularly at home. Before the advent of the oven, it would have been cooked daily in a three-legged iron pot known as a bastible, over the embers of the turf fire.

The kitchens of my Irish childhood were places where my mother, grandmother and aunts were always baking and there was much discussion over the best recipe for Brown Soda Bread. One person would swear by buttermilk, someone else would use soured ordinary milk, and a third would substitute the plain flour with self-raising to ensure a good rise. Nor could they agree on any other parts of the recipe, never using anything as prosaic as weighing scales. It was always a handful of this and a drop of that – they knew instinctively how the dough should feel.

They never used a loaf tin, either, instead shaping the bread into a thick round and baking it flat on a baking sheet. There was always a cross drawn on the dough with a sharp knife before it was put into the oven. In my house this cross was to let the fairies out, in others it was to bring the blessing of the Father, Son and Holy Spirit upon all who ate the bread. But there’s a more earthy reason behind it. As the bread bakes, the cross opens up, allowing the heat of the oven to reach the centre of the bread and ensuring that it cooks properly.

For anyone who has been put off making their own bread by the palaver that surrounds yeast baking, this recipe is simplicity itself. Put all dry ingredients into a bowl, add buttermilk – I always use Karikaas – mix briefly, dump it into your tin and land the loaf in the oven. The important thing to remember is, as with muffins, not to over-mix or you’ll end up with a tough loaf. Be sure and wrap your hot loaf in a clean tea towel when you take it out of the oven. Otherwise it gets tooth-damagingly crusty.

Brown Soda Bread is well matched with chunky vegetable soup or some cheese and salad as part of a light lunch. The recipe is also endlessly adaptable. Although it’s far from traditional, I always replace 75g of the wholemeal flour with pumpkin seeds and wholegrain oats, sprinkling sesame seeds on the top of the loaf. Alternatively, you could use all white flour and make White Soda Bread to which you can add a handful of sultanas or herbs, olives or sun dried tomatoes.

Sieve the plain flour, wholemeal flour, bicarbonate of soda and salt into a large mixing bowl, adding any bran that remains in the sieve. Add the sugar and mix thoroughly. Make a well in the centre of the dry ingredients and pour in 400ml of the buttermilk.

Stir with a wooden spoon to form a soft, but not sticky dough, adding more buttermilk if necessary. Turn the dough into the tin, leaving the surface rough.

Bake in the preheated oven for 30 minutes. Reduce the heat to 150°C/300°F and cook for another 30 minutes. Ten minutes before the end of the cooking time, remove the loaf from the tin and place back in the oven to ensure that the base is cooked through.

The bread should be well risen, brown and crusty on top and sound hollow when tapped. Turn out on a wire rack and wrap in a clean tea towel until cold.