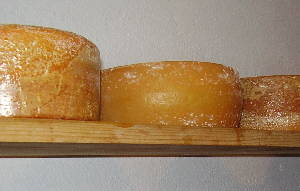 Tom Biggane is quietly confident. “Let the cheese do the work,” he says. “If it’s good enough it will sell itself.” And Clonmore Goat’s Cheese has proven more than good enough. A gold and silver medal winner at the National Farmhouse Cheese Competitions, Sheridans Cheesemongers sold out of their stock of the hard gouda-type goat’s cheese before Christmas and are not expecting to get Clonmore back in until June. This seasonal farmhouse cheese is nutty and smooth, with a satisfyingly sweet goaty aftertaste that intensifies as it matures. Not that it often gets a chance to sit around for long.

Clonmore is made by Tom himself in the little extension on the side of their farmhouse near Newtown in North Cork, with his wife Lena going across the road twice a day to milk the 80 goats that make up their herd. It is labour-intensive work. Late February, when I met him, is a quiet time of the year but the goats are due to start kidding any day and then it will be work seven days a week for four months solid. They make cheese from late March onwards, giving it at least two months to mature before putting it on the market, and working straight through until the goats start to dry up in late October and early November.

Unlike goats on the continent that live and are fed indoors, Tom and Lena’s goats are free-range, able to roam about 20 acres of pasture with a comfortable shed for them to bed down in at night or shelter in if it’s a wet day. Intelligent animals, goats, and not very willing to stand around in the wet and cold when they have a chance to be indoors. When they do deign to emerge into the outside world, the goats are natural browsers, often happier to nibble at shrubs and bushes in the ditch than graze the grass in the field. Or, as Lena points out, to get stuck into a neighbours garden if they manage to escape. As a result of this less than intensive farming, the Bigganes only get 150 gallons of milk per goat per year – a good yield would be 200 gallons – but it is the access to grass that, Tom believes, makes all the difference in the taste of the cheese.

A reserved man, Tom is nevertheless passionate about cheese-making. Although the Bigganes started keeping goats to subsidise the cows – Tom also milks 40 cows every day – it has become more than just a way of keeping the rest of the farm going. “We got into it to supply other people,” he explains, “but, as time went on, started cheese-making ourselves.” In 1994, the LEADER programme, a EU Community rural development initiative, and local organisation, Ballyhoura Development, were looking for someone in the area to supply a cheese-maker with goat’s milk so Tom and Lena, after some work on the fencing to contain the notorious escape artists, added goats to the farm. After a few years observing other people making cheese from their milk, one of the people that they supplied was getting out of the cheese-making business so he sold Tom the equipment in 2000. A couple of cheese-making courses later – one at the Dairy Products Research Centre in Moorepark, Fermoy and another specifically for people interested in making goat’s cheese in Thurles – Tom started producing a few rounds of cheese. Iago in Cork’s English Market was their first customer then Kevin Sheridan of Sheridans Cheesemongers also started taking cheese. It was a slow and a small start, the production of Clonmore growing with its market until, as Tom laughs, “it passed us out”. He believes everything fell into place about three years ago. They fell short of cheese in 2004 and last year Sheridan’s sold out just two months after the Bigganes stopped producing.

Tom likes a break of a few months but he thinks that the current six-month gap is too long. “We need to grow and fill that gap,” he declares and, to that end, he is waiting on the arrival of a new 500-litre vat from Holland to replace their small, antiquated 130-litre one. At the moment each batch only makes five or six 2-3kg cheeses at a time and last year he had to make cheese every day. “Last year was a bit of a drudge,” he says, “because we were constantly working. I wasn’t looking forward to it this year but the new vat should let us make cheese every second day.” Tom is also planning to expand the flock – but not too much. Last year they milked 50 goats, this year it’ll be up to 80 and, within two years, they’re hoping to have 100 goats. Then, he thinks, it will be more than enough for the family themselves to manage. “If it gets any bigger we’ll have to take someone on.”

Farmhouse cheese-making is as much an art as it is an artisan craft. Within certain specific parameters – the cheese is made on one farm, by one family, using the milk from one flock – there are an almost infinite amount of variables. The grass and natural herbage, the terroir, combine with the personality of the cheese-maker to make a unique product. Tom speaks with distain about the uniformity of factory-made cheeses, telling me that the character of Clonmore changes all the time. “Every day’s milk can be different, depending on the time of the year,” he notes, “and, if you stir and cut a minute longer it makes the cheese different. Even if you let the cheese mature a month longer it’s not going to taste the same as it did a month before. It’s a living thing. I find it very interesting.” There’s a danger, though, in getting new equipment. “My biggest fear,” Tom admits, “is that I won’t be able to turn out the same cheese. I don’t want the cheese to change, whatever about the vat.” The customers that turn up at Iago and Sheridans time after time to buy Clonmore would be very much in agreement.

New season Clonmore Goat’s Cheese should be in the shops by June and will be available from Iago in Cork’s English Market and Sheridans Cheesemongers in Dublin and Galway.

Sheridans Cheesemongers notes on Clonmore Goat’s Cheese, courtesy of Kevin Sheridan
Clonmore is a small, gouda-shaped cheese with a beige waxed exterior and a bone-white paste that is intermittently freckled with small holes. In good condition the cheese is milky on the palate with a cheesey tang that gently gives way to the unmistakable rounded, goaty finish that typifies Clonmore. Make no mistake, this is a wonderful hard goat’s cheese. It is in no way sharp or soapy yet has a distinctive, smooth flavour that can be amazingly more-ish.
Clonmore is one of those cheeses that is better served below room temperature, left out in a warm room it has a tendency to become slightly oily. Clonmore partners well with scaled down wines, enjoy chilled with a Chablis or a good Sauvignon Blanc from the Loire.