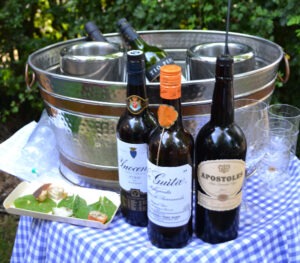 A closer look at that sherry at Ballymaloe House

After a scattered start – I forgot to check this week’s duties and I was actually on early salad prep – Monday was a day spent sitting in demo for the home butchery part of the course. We started easy, jointing a chicken and duck, gradually working our way thorough half carcasses of lamb, pig and a large chunk of a dead bullock. It was not the day to have a hangover as German butcher Philip Dennhardt cut and sawed his way through a small mountain of flesh and bone. As a child I loved being sent to the local butcher, especially if there was a long queue as it gave me an opportunity to gaze, fascinated, at the butcher as he went about his business, reducing large hunks of meat into family-sized portions. Today we watched as chickens were spatchcocked, legs of lamb filleted, pork brined and sausages made. I’m not sure when I’ll next be landed with a lamb carcass to cut up but at least I’ll have the notes at the ready.

Friday night was the first time we cooked together in the Ballycotton house. The Husband enjoyed watching as three Ballymaloe cooks worked on his dinner. It wasn’t just him we were feeding, though, some of our classmates were coming over for a simple meal – Smoked Salmon and Chive Cheese Bruschetta, Roast Chicken with Ham, Stuffing, Glazed Carrots and Cauliflower Cheese, followed by Homemade Vanilla Ice Cream and Pedro Ximnez desert sherry (yep, we had a sherry masterclass last week!) and Chocolate Covered Caramelised Almonds (I had a spare 15 minutes during that morning’s cooking). And this was all after we had the usual post-demo plateful. A very relaxed and wine-fuelled meal was followed by a trip to the Blackbird, which was packed with fellow students all dressed up for a Halloween Party. Work hard all week; party any chance we get!