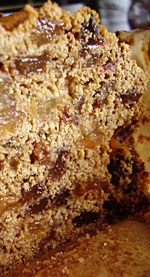 I’m not much of a fruitcake fan but Tea Brack is an altogether different story. Because the fruit is soaked overnight it avoids the dryness that can often spoil a fruitcake, cuts into gorgeous thick slices and responds particularly well to being generously buttered and served with large pots of tea. The English Engineers, this time without Bridie, came to visit for the weekend so – as I had recently discovered that I had a stash of dried fruit, particularly golden raisins – I brewed up some tea on Thursday night, left the fruit to soak in quite a leisurely manner until Friday lunchtime, when I discovered that I needed to be in Cork at 6pm. The brack was promptly thrown together in a most hasty manner so that it would be cooked before I had to leave the house.

Despite the hurry, it worked out well. I made double the mixture – two large 2lb loaves – and, the Engineers now on the plane home, there is just one half of the last brack left. I had intended to use a drop of whiskey to intensify the flavours but my search in our cellar (the unfinished gap under the stairs where we land all bottles of alcohol) showed that the Husband had imbibed the last of the Jameson during the last cold spell so I had to settle instead for the Ballyvoddy Damson Gin that I made last October, which added an extra note of fruityness to proceedings.

The night before you intend to cook this, place the tea, gin or whiskey, mixed dried fruit and sugar into a large bowl. Stir well, cover with a tea towel and leave to sit overnight or for at least 12 hours.

Stir the beaten egg and melted butter into the soaked fruit. Sieve the flour, bread soda and spices together and gently mix into the fruit mixture. Scrape and pour into the prepared tin and bake in the preheated oven for 1½ hours until dark golden brown, well risen and, when tested with a skewer, it comes out clean from the centre.

Cool in the tin for 10 minutes, then remove and allow to cool fully on a wire rack.