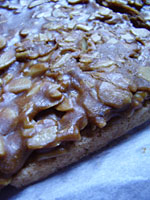 The Sweet Treats still continue, although I spend more time making rather than writing about them these days. Last week’s offering was Butterscotch Almond Shortbread, which is like Tan Slice but not quite as buttery! I already got one request for the recipe, from the Teenage Workmate, so here it is. Next time, however, I think I might go for a slightly thicker shortbread base.

Preheat the oven to 150ºC. Butter and line a swiss roll tin with greasproof paper.

Whip the butter with a hand-held whisk until soft. Add the icing sugar and cream together until the mixture lightens in colour. Sprinkle over the flour and cinnamon and mix, at low speed, until it starts to come together. Empty the bowl into the prepared tin and, using slightly damp hands, press it into a relatively even layer. It may be sticky

Cook in the preheated oven for 20-25 minutes until golden brown. Meanwhile, put the brown sugar, golden syup and butter into a heavy based saucepan and stir over a low heat until melted. Simmer for ten minutes, then pour over the base and sprinkle with flaked almonds. Return to the oven and cook for five more minutes. Cool on a wire rack, cut into pieces and remove from the tin when cold.