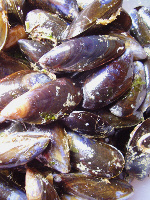 Tuesday was not a nice day. As I drove down to Kilmackillogue pier in Kerry in the morning, the rain rarely stopped beating against the windscreen as the wipers battled to give me a view of the road. It was not the perfect day to go out on a boat yet that’s exactly where I was heading, off harvesting mussels with Paul Kelly, who is a part-time mussel farmer as well a gold and silversmith. On a brief stop in Kenmare – Jam was calling for morning tea – I took a moment to admire Paul’s rings, which combine gold, silver and both precious and semi- precious stones, in the window of his shop, before hitting the wet road again for the extra half-hour drive to Kilmackillogue.

There were a few fishermen already out on the sheltered pier, well-clad in bright yellow oilskins and debating the state of the markets as they readied their shrimp pots. Paul layered up his waterproofs – I just had my NZ raincoat which is generally very useful, but not in this kind of weather. It just took a few minutes on the small boat, zooming out to Paul’s mussel farm, before I was wet through. At least the top half of me was someway dry but I’ve never regretted my lack of waterproof leggings so much before. At least the water was calm and I was somewhat sheltered from the worst of the rain by standing behind Paul as he steered the boat into the bay.

We went way out, through rows of buoys, rafted together, marking where the mussel-growing ropes are located. When we reached Paul’s farm, he reached under a buoy and pulled up one of the ropes. It’s still early in the season but it was loaded with full sized mussels, which he easily pulled off by hand, along with hundreds of little crabs and starfish and lots of random bit of seaweed. Mussel fishing in Kilmackillogue is done very simply: if you hang the rope, they will come. Tiny seed mussels attach themselves to the rope and grow there, in seawater that is six fathoms deep. They then look after themselves, staying open underwater, feeding constantly until they are large enough to be harvested.

With a brief stop at a sorting table on a raft near to shore to get rid of the smaller mussels and associated debris, we returned to the pier, me wet to the skin and starting to freeze. Paul exports the majority of his mussels to France, saving a few for local restaurants including The Lime Tree in Kenmare, where I first tasted them. He landed a large sack of the mussels we had collected in the boot of my car, warning me that they might be a little salty as they were still full of seawater. I nodded, teeth chattering, as I planned huge bowls of Steamed Mussels for supper, Mussel Soups and Seafood Stews, Paella or maybe some Mussels with Garlic Breadcrumbs…

Later that night, after I had distributed bags of mussels to my mother, aunt and half the neighbourhood, the Husband and I sat down to a feed of Mussels Steamed with Garlic and White Wine. Paul was right – the liquor released was saltier than I am used to – but it didn’t spoil our appetite as we relished the chance to eat the plump, juicy morsels to our heart’s content. I steamed the remainder, picked the mussels from the shells and froze them to eat another day – despite our best efforts, we’re just not able to eat more than a couple of kilos at a time! I don’t think I’ve ever had the opportunity to eat mussels so fresh and delicious.