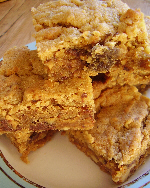 On the times that I’ve seen it – not having a television, I watch online from the RTÉ website – I’ve been enjoying Bake, Rachel Allen‘s new food show. As you may have noticed, I do very much enjoy baking and am always on the look out for new recipes. Her new book is crammed full of great things to try – I’ve already got lots of pages marked for revisiting – but only had a chance to try out one of the recipes so far. A jar of peanut butter in the house meant that Rachel’s Peanut Butter Blondies were crying out for a test run but I almost balked when I read that the recipe only made 12 small squares.

If I’m baking, I want there to be plenty for sharing around and so never make less than a swiss roll tin’s worth, which – depending on the density of what I’ve baked – can be cut into 24 to 30 pieces. So I doubled the recipe but I couldn’t leave it alone at just that! I used dark instead of white chocolate, added toasted walnuts to up the nutty quotient and, because I thought that.the mixture was much too thick, threw in an extra egg (have chickens, will use eggs). If you don’t over cook them, they turn out nicely dense and nutty with surprise hits of chocolate all over the place. At the cottage, we especially like them warmed and eaten with some ice cream but they don’t suffer too much from being eaten with a coffee or hot chocolate in work either. Well worth trying – but you definitely need more than 12 small squares.

Preheat the oven to 170ºC (150ºC fanbake). While it is warming, use it to toast the walnuts until you can smell them, then chop roughly. Butter a swiss roll tin (30 x 23 x 4cm) and line it with a sheet of greaseproof paper.

Cream the butter and peanut butter together in a large bowl until soft and creamy. Beat in the sugar, eggs and vanilla. Sieve the plain flour and baking powder together then add to the mixture with the toasted walnuts and dark chocolate.

Smooth the dough into the prepared tin and cook for 25-30 minutes until golden brown and almost firm in the centre. Avoid over cooking as the blondies need to retain some moisture.

Allow to cool in the tin and then cut into pieces.