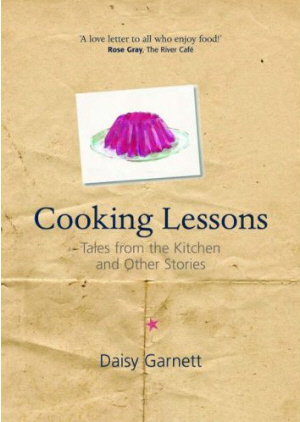 Despite its title, this is not the kind of book that you’ll pick up if you’re really wanting to learn how to cook. Cooking Lessons could as easily be titled Life Lessons, the kind of things that you learn as you experience – in journalist Daisy Garnett’s case – a few years spent working in New York, a series of disastrous boyfriends and thinking time sailing across the Atlantic en route to resuming life back in England.

The time spent on the boat is the the fulcrum of the book. Although she didn’t think that she could cook, she was forced into spending her time, as the only non-sailor afloat, feeding the crew. It acts as a jumping off point for musings and recollections about her experiences cooking with friends and family. Nuggets of advice and recipes come from Daisy’s mother, novelist Polly Devlin, Rose Grey of the River Café and Ballymaloe teacher Rory O’Connell.

Although slight, Daisy’s warts and all account of her (mostly) unfulfilling relationships as told through the prism of food is both endearing and charming. And you’ll pick up more than a few useful ideas and recipes on the way. One to curl up with on a miserable night.