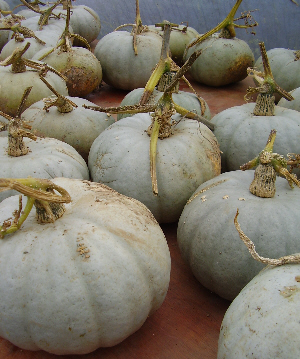 I stayed at Gort na Nain back in May and was only too delighted to have an excuse to return and talk to Ultan at length about the vegetables that he grows (Denis Cotter of Café Paradiso is a big fan too – check out his last book, Wild Garlic, Gooseberries…and Me). There wasn’t so much going on in the polytunnels at that stage in the year but I did get to admire Ultan’s magnificant crop of Crown Prince squash, all sitting around on benches in one of his polytunnels, just seasoning in the dry before they get stored. I had a close encounter with them on New Year’s Eve as well, when I was sitting next to a display of Crown Prince in the window of Café Paradiso. What else could I pick for my main course other than a squash gratin, which came with walnut and gingered kale, lemon-cumin cream and star anise-braised salsify.

The Sunday that we had lunch at the Sha-Roe Bistro proved to me that sometimes it’s worth travelling a distance for food, although driving 2½ hours for a meal isn’t something I wish to make a habit out of. In this case, however, it was more than justified. The Husband and I arrived first so we had plenty of time to relax beforehand in the elegant reception area and toast ourselves at the roaring fire. We were joined by the Producer, his father and girlfriend for a delicious lunch, made all the more memorable by the fact that we were seated at the chef’s table, right next to the kitchen so we could watch Henry as he cooked. Every mouthful was a pleasure, with tastings being swapped around the table – nobody’s dinner was safe! After much testing, we figured that the ultimate dinner would be the Wild Pheasant and Apple Burger (the Husband’s choice), followed by the meltingly tender Slow Roasted Pork Belly (my lucky pick) but the desert would be a toss up. I had the Fig Tart Tatin, which came with Toffee Ice Cream, but there were lots of other tempting options. A leisurely, hospitable three course Sunday lunch is just €34.

You can catch me talking to Ultan and Henry on Foodtalk: Garden on Newstalk 106-108fm at 7.30am tomorrow, Saturday 24 January, and Sunday 25 January at 9.30pm or listen online here: Foodtalk on Newstalk – Garden.mp3