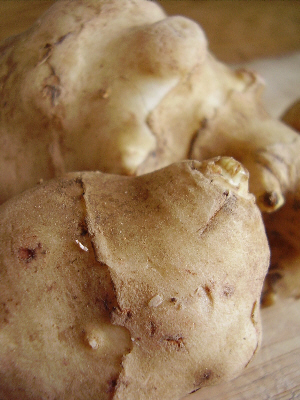 A quick trip to the first Killavullen Farmers’ Market of the year last weekend produced an unexpected treasure. I pounced on a pile of just-scrubbed nobbly tubers on the Nano Nagle stand – Jerusalem artichokes. Also known as fartichokes (in my house anyway) they’re not vegetables that you come across on sale too often.

We tried to grow them last year but, as with so many of the things that we planted, the rabbits thought otherwise. Having read a lot about how they are a virtual weed in many gardens, I have high hopes of them turning up again but, until now, it has been an artichoke-free winter.

They have a rather sweet, earthy flavour, both nutty and garlicy. I had wanted to try them raw in a salad but, with the intensely cold recent weather, decided to go down the soup path instead as they make an almost velvety, warming soup. Their nobbly-ness makes them difficult to peel so – always being one for a shortcut! – I just give them a good scrub (watch out for soil in the crevices unless you want a gritty, rather than velvety, soup), chop them up and threw them into the pot. At least that way you end up with more of the artichokes in the soup than in the compost bin.

Melt the oil and butter in a large, heavy-based saucepan.

Fry half of the chopped streaky bacon for a few minutes then add the onion, thyme, garlic, artichokes, parsnips and maple syrup and cook until slightly softened, stirring occasionally.

Pour in the stock and milk and bring to the boil. Cook for 10 minutes or until the vegetables are just cooked through.

Blend using a hand-held blender or liquidiser and season to taste.

Meanwhile, fry the rest of the chopped streaky bacon in a hot pan until brown and crispy. Serve the bowls of soup topped with spoonfuls of crème fraîche and a scattering of crispy bacon.