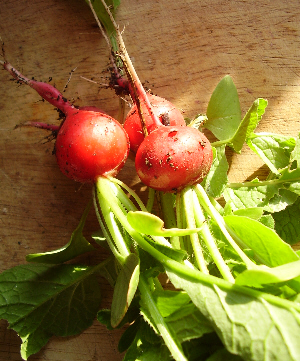 We were slow off the mark this year with our planting but now – finally – we have some produce from our garden. The salad seedlings that the Husband set in large pots (they are easy targets for the slugs and whitefly if planted out in the garden) are taking off so we now get to have more than just the one leaf per meal.

Herbs that I thought were dead – tarragon, marjoram, lovage, garlic chives – have resurrected themselves to be repotted and join the little container garden that lives outside my kitchen. I already have bay, rosemary, thyme, lemon thyme, both curly and flat leaf parsley, chives, sage and a large fennel there for the picking. The mint is taking over a damp patch near the ditch, we have high hopes for the corriander this year and the two basil plants that we got at the Killavullen Farmers’ Market are recovering from a somewhat bumpy trip home.

Being able to use handfuls of herbs in cooking is one of the great joys of growing your own. I never could be bothered with those measly supermarket packets, especially after living close to Middle Eastern shops in Dublin that sold parsley, mint and corriander by the large bunch rather than the stalk.

The four raised beds out in the garden are playing host to a variety of vegetables, including beetroot, cucumber (a Siberian variety, hope it can cope with Ireland!), tomatoes, carrots and some very healthy looking shallots. So far, at least, they’ve survived the demise of Little – we don’t seem to have much luck with cats – and the resurgence of our rabbit population. The Husband went to town with the potatoes, which are divided between one of the raised beds and several adjacent ridges. It’s looking like we won’t have to buy spuds for a while to come.

The most prolific edible crop, so far, has been the radishes. A variety from Brown Envelope Seeds called Scarlet Globe, their skin is a vivid red colour, a gorgeous contrast with the snow white flesh. We’ve been eating them tossed in with all leaf salads, they make a crunchy addition to my Warm Potato and Chorizo Salad on cooler nights and I’m loving Clothilde’s combination of radishes, mashed avocado and smoked salt. I still have a little garlic and chilli manuka smoked salt from our last NZ trip which goes particularly well with this line-up of ingredients.

Clothilde also has a Radish Leaf Pesto recipe, although our leaves are a little too hairy to be really palatable, no matter how much we try to convince ourselves. If you also have a radish glut – some day we really will learn about successive sowing! – you can find some more recipes here.