The Food of a Younger Land by Mark Kurlansky 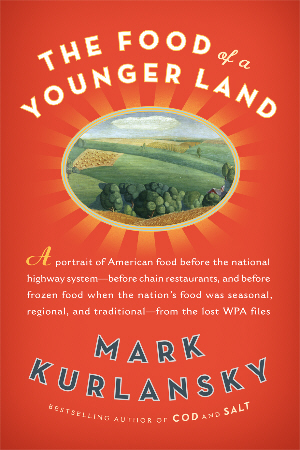 Great research is the key to Mark Kurlansky’s The Food of a Younger Land. The subtitle – A Portrait of American Food–Before the National Highway System, Before Chain Restaurants, and Before Frozen Food, When the Nation’s Food Was Seasonal – explains the what of the latest book on food from the author of Salt, Cod and The Big Oyster.

The why stems from the 1930s. The Federal Writers’ Project, part of President Roosevelt’s New Deal, sent writers out across the country to write about and record the food of the land. This project, called America Eats, was shelved after America became involved in WWII and never fully completed. Although untouched for years. Kurlansky takes the bones of the research, some more fleshed out than others, and puts it in context, explaining who the writers were – some were just typists, others authors in their own right – as well as giving more information about food and customs mentioned in the text.

I grew up on classic American children’s literature like the Little Women series by Louisa May Alcott, Laura Ingalls Wilder’s Little House on the Prairie books, and the What Katy Did books by Susan Coolidge so the descriptions of sugaring-off, baked beans, spoon bread and pop corn are richly evocative. The Food of a Younger Land fills in the fascinating back stories of many dishes that appear not only in children’s books but also in American novels and films. Parts of it will also be familiar to fans of the Kitchen Sisters’ Hidden Kitchens radio series.

The Food of a Younger Land is an epicurean tour of a time long disappeared. Wend your way, in Kurlansky’s friendly company, along the backroads of a different America, a land where squirrels were regarded as game, the mint julep causes controversy and hush puppies come from Florida. A book well worth savouring.

The Food of a Younger Land by Mark Kurlansky is published by Riverhead Books.