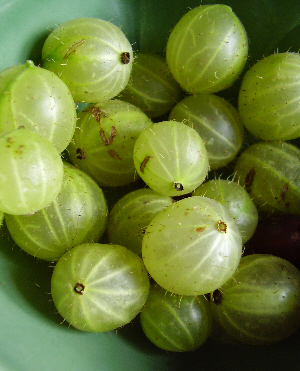 Seventeen gooseberries does not a summer make. I have a pair of bushes that were planted out next to the blackcurrant bushes last summer – one that should produce green berries, the other red. But this year, between the two of them, I could only hunt down a total of seventeen gooseberries. I think that they may be too sheltered where they are. There is a ditch behind them and the sycamores growing there tend, despite much cutting back, to hang over the fruit bushes. Come this winter, it may be time to move them to our developing mini-orchard at the back of the garden. The apple and pear trees wouldn’t give too much shelter at this stage.

So what did I do with my scanty harvest? To make the most of it, I took a tip from Jane Grigson and stewed them for a little time with a bit of butter and a drop of water. We were out of elderflower cordial or I would have used that instead of the water. When the berries had broken down a little, I added some sugar, crushed them with the back of a fork, then swirled the cooled mixture through some natural yoghurt for a simple (cream-less) fruit fool.

Don’t sweeten the character out of the gooseberries. You want something tart and well flavoured. In fact, if you have the red gooseberries, I find they are so sweet that you may not need any sugar. They didn’t actually make it into the photo, getting eaten by the Little Sister and I as we peered around the bushes, seeking more.

While nice in small amounts – and good for making the most of the few berries that you may be able to gather – this recipe would also be well worth trying if you had more than seventeen gooseberries in your garden.

Melt the butter and add the gooseberries and a little water or elderflower cordial. Cover and allow to cook over a low heat for about five minutes until the berries are soft enough to mash with the back of a fork. Add sugar to taste and allow to cool.

Whisk the yoghurt until it is smooth then fold the fruit mixture through, as much or as little as you like. Serve in small glass dishes to show off the fruit and yoghurt mixture, with thin almond biscuits or amaretti.