How does your garden grow…organically? 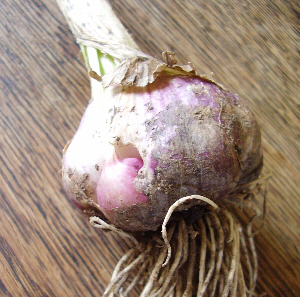 Last summer, when we had the Mallow Farmers’ Market running outside Urru, we saw a lot of Patrick Frankel, a local organic vegetable grower. When he started coming to the market he had just started producing vegetables on his family farm near Doneraile and customers were delighted with the early fruit of his labours: spring onions, yellow and green courgettes, an assortment of tomatoes, new potatoes, peas and, my favourite, mangetout. I bumped into him a few times at the Killavullen Farmers’ Market, always making sure to stock up on the mangetout – great shredded and tossed raw into salads or briefly steamed and served as a side – but hadn’t seen him around for a while so I was delighted to see that the North Cork Organic Group had organised a farm visit.

The NCOG take their meetings out and about during the summer months. In June there was a visit to the Secret Garden Centre near Kanturk which we unfortunately missed. August’s outing – the Sunnyside Fruit Farm in Rathcormac – is already up on the calender. After getting a total of 17 gooseberries off two bushes this year I need to pick owner John Howard’s brains for some soft fruit- growing tips.

Although we had plenty of sunshine and showers last Sunday, luckily the rain stayed away for our walk. The four acres Patrick cultivates are situated on his family farm so alongside two busy polytunnels and many neat rows of outdoor vegetables are his father’s working Percheron horses, a collection of pigs – one of which, much to the delight of the children on the walk, was nursing a couple of tiny piglets – a fabulous old walled garden, and, in the stables, a magnificant black Percheron stallion. He grows garlic in the walled garden alongside the old apple trees and a variety of other fruit and, in a one-for-everyone-in-the-audience-stylee, we were all allowed to pull a bulb to take home. Wet garlic – yum!

While admiring the neat rows of vegetables, the appreciative audience picked up tips on avoiding carrot fly infestation (Patrick uses a ground cover material to keep down weeds which doesn’t give the flies anywhere to lay their eggs) and found out where he sourced the movable electric fence that keeps his hens away from the growing area. We’ve found our hens (now, sadly, down to two) happily digging up seedlings and making a nuisance of themselves around the raised beds, especially after an afternoon’s weeding. The fence that Patrick uses might also give us a chance of keeping the rabbits away from targeting the few cabbage, kale and bean plants that are left.

Patrick, who is making tentative noises about a future vegetable box scheme for the area, is currently selling at the Coal Quay Market in Cork every Saturday. Watch out for the mangetout…