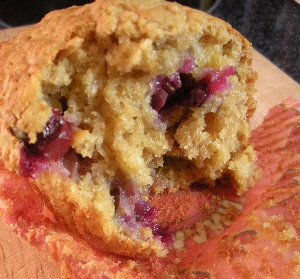 My Clonmel Cousin has been getting into the gardening gifts lately – and I’ve been the lucky recipient, getting a cheerful pink petunia and fuschia pot for my birthday and a Christmas present of a hazel tree with a pair of blueberry bushes. We had tried blueberries in the garden previously but they’re big fans of acidic soil and I don’t think we added enough peat moss into the spot where we planted them. This time round, when I was planting the bushes, I landed plenty of peat moss into the hole – with good results.

Our soft fruit area is near the clothesline so most of the fruit – that’s also where our gooseberries, blackcurrants, raspberries and rhubarb are planted – bypasses the kitchen, going straight into my mouth as I hang out the (mostly pink) clothes. Having been down in Ladysbridge for a week, enough blueberries survived on the bush to cook with last weekend.

While the Husband took his cousin and her husband for a walk up the Canon Sheehan Trail in the Ballyhouras, Little Missy and I minded the house (and tent: short of space, the Husband, LM and I were camping in the garden for the weekend). We also took the opportunity to pick the ripe blueberries and stir them into the batter for Oatmeal Muffins. Warm out of the oven when the walkers returned, they didn’t last for long and the mixture of oats and berries made us feel very virtuous, even when we were having thirds! Must try some blackberries next time I’m making those muffins.

Update 28 August: Forgot to give the link to the original muffin recipe! Here you go – Val’s Oatmeal Muffins. Just add a large handful of freshly picked (approximately 100g) blueberries – or more! – to the batter before dividing it between the muffin cases.