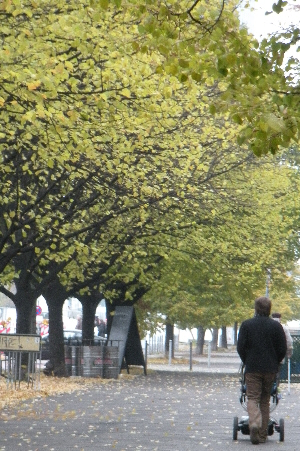 Coffee and cake – kaffee und kuchen; can you think of a better thing to warm you up on a bracingly cold Berlin afternoon? Over the course of ten days in Germany there were a lot of stops with Little Missy for a variety of sweet treats – and a lot of walking to compensate! Herself, myself and the Husband were staying at an apartment in the Friedrichshain district so, with the Husband gone from early to late on his course, LM and I set off to explore the city together. She slept mornings then, as soon as she cocked an eye, was scooped up, wrapped warmly, landed in the pushchair and we took off.

It took me a little while to figure out how to manage the u-bahn with LM so I discovered that walking from the apartment to Alexanderplatz took just over half-an-hour along the historic Karl Marx Allee. Half way there, Café Sybille was always a welcome stop for refreshments plus a side helping of history from its mini-museum on the building of Stalinallee, the Communist-centric former name of Karl Marx Allee. If we got as far as Alexanderplatz before LM needed a stop, the food department on the ground floor in Galeria Kaufhof was another good spot after I figured out how to work their system. Basically, grab a seat in the back corner and find a place to park the pushchair, figure out what you want to eat from the menus on the tables and order from the surrounding counters. For a sugar hit, their cake counter, piled high with lots of delightful sweet things (a tart of caramelised nuts on a biscuity base was a favourite) is particularly good.

Managing a pushchair plus a Little Missy around any city on your own is not the easiest and I did end up walking past plenty of places that looked great but weren’t so easily accessible. That said, once I found the u-bahn stations with lifts (all clean and most of which worked), the city was much easy to travel around – praise be for barrier-free travel – so we roamed around the Tiergarten (tip: if you have a baby with you, you get to skip the two-hour queue for getting to the top of the Reichstag building), spent mornings in the Spandauer Vorstadt (grab some bircher muesli at Milchhall Berlin or Blintschiki in Gorki Park) and, in the last few days, discovered the delights of our Friedrichshain district (eating pizza from a woodfired oven at Pizza da Dante, taking away some beautifully decorated treats from Cupcake Berlin or visiting my local 50s milkshake bar at Milkabilly).

As Little Missy goes to sleep these days between 7pm and 8pm (if we’re lucky!) there wasn’t much chance for evening adventures but, when the Sister came over for a few nights, herself and myself did get a night off to head for dinner with The Shy Chef. But that’s a whole other story…
Berlin: Bashful dining with the Shy Chef