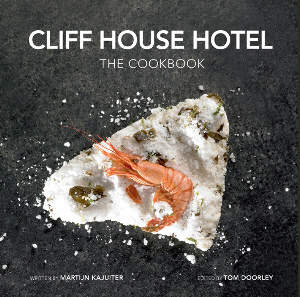 In the last few years, the Cliff House Hotel has really put Ardmore on the map. A small seaside village in Co Waterford, Ardmore was one of those places we visited as children during our summer holidays along the coast in Youghal. We always loved the cliff walk and I remember the old hotel that we used to pass on our way there, remarkable only for the large garden alongside.

Now, in its place, there is a spanking new hotel, far bigger than the original, and making the most of its scenic position on the cliff side. My Twin Cousins and I visited last year – we had a delicious light lunch in the bar – but I have never (yet!) had the opportunity to eat dinner there. After reading chef Martijn Kajuiter’s cookbook that may soon be remedied.

Being Dutch, Kajuiter brings a new eye to local ingredients. He takes something simple – and very Irish – such as Potato Soup and transforms it by including apples, eggs and almonds. Spelt Bread is given a Cork slant with the inclusion of Beamish and Ardmore shrimp get turned into Dutch Shrimp Balls. Some of the recipes come from local sources, such as Granny McGrath’s Brown Soda Bread, and Kajuiter has his own take on Irish Stew, using meaty lamb shanks. He talks with affection of his local suppliers and producers – gooseberries from Mrs Nugent, sampire and seakale from Liam Kelly, while St Raphael’s residential and daycare centre grow salads for the hotel.

All the dishes are beautifully plated but this is not just a coffee table brochure for the hotel: it is a genuinely interesting cookbook with many usable ideas. That’s not to say that a restaurant sensibility doesn’t creep in sometimes. Kajuiter’s solution to the problem of producing a still tender, yet well done steak is to cook it sous vide with a dash of whiskey, a great response to the Irish refusal to eat meat with any hint of blood, but hardly feasible for home cooking! Leaving that aside, there are lots of inventive ideas for the home cook, including things like bread dough wrapped around sausage rolls, Bread and Butter Pudding with Wild Mushrooms, peas cooked with oregano and lemon juice, olive oil used to make Chocolate Mousse. The chapter on jams and preserves is particularly good, with recipes for Pumpkin Chutney, Elderflower Barley Water and a variety of fruit cubes (Strawberry and Black Pepper, Lemon and Mint Fruit Tea).

Plenty to try in your own kitchen – and even more to whet the appetite for a visit to the Cliff House Hotel.

Must Try: Irish Spelt Bread with Beamish, Honey and Thyme