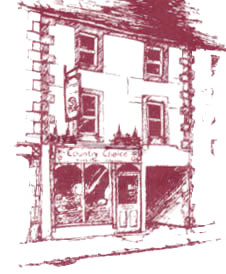 Peter Ward established the well-regarded Country Choice café and deli in Nenagh, Co Tipperary in the early 1980s. He talks to Caroline Hennessy for EveryMonday.ie about how he thinks the latest recession will affect Irish artisan food producers. More here.

When Peter Ward opened Country Choice café and deli in Nenagh, Co Tipperary, in 1982 during the last recession, there was no such thing as an artisan food producer in Ireland – or, at least, no one that used that term. “They didn’t call themselves artisan producers,” Ward says, “but there were wonderful people who were showing food at the county and agricultural shows. If you went to these shows, you could get an endless supply of ducks, geese, Maderia cakes, apple tarts, jam, tomatoes and Beauty of Bath [a type of apple]. That was the bedrock of my business at the time.”

Plenty of pies
Hand in hand with those producers, Country Choice has gone from strength to strength, becoming a place of pilgrimage for those interested in good Irish food. Its owner hasn’t stood still either. A shopkeeper to his fingertips, Ward also has those fingers in many other pies: he is the chairperson of the Bord Bia Taste Council; he is a stalwart member of industry group Good Food Ireland; and he is known to many for his appearances, passionately championing local food, on RTÉ’s Late Late Show.

Talking about the problems that artisans currently face in the Irish food market, Ward identifies the “the value agenda” as the biggest challenge. “People perceive cheap as value,” he points out, “and of course, that’s not the case at all. For me, value has a lot to do with nutrition; value has a lot to do with pleasure, an experience – more so than just buying cheap in a discounter or a shop that thinks that it is a discounter.”

Shop local
With purse strings being drawn ever tighter these days, there is an element of consumers knowing the price of everything and the value of nothing as they bemoan the loss of local shops while being unwilling to support them.

“Irish people need to realise that, unless they support the butcher and the baker and the artisan, we’re not going to have them,” Ward states bleakly. “They don’t realise that every single person has a role to play.”

Direct benefits
The spread of anonymous supermarkets across the country has removed the idea that consumers might have any kind of relationship with the person that produces their food. That idea is anathema to Ward, who thinks that direct sale, and cutting out the middleman, has many benefits for both producers and consumers.

“I think the greatest opportunities for direct sale would be in things like primary proteins. If you had beef and your friend had lamb and somebody else had chicken, you could get together in a small group and market those items either singly or as a group.”

Ward maintains that the idea of buying direct from the producer is as valid to students as it is to households that are challenged with a shortage of cash. “I do believe it would be cheaper for people to buy product like this, maybe in small groups. There is definitely room out there for a whole new relationship between the producer and the purchaser.”

Harnessing technology
Ward expresses his belief that artisan producers will survive by thinking smart and looking at multiple routes to market, harnessing technology to facilitate internet purchasing and using Twitter and Facebook to launch and publicise campaigns or special offers.

While farmers’ markets have a value, Ward explains that selling through a market alone is not going to be economically effective. He paints a convincing picture of producers using the markets as a means to an end rather than just the end itself.

“The visibility of your product is your public face one day a week at a farmers’ market but all you’re really doing at that market is that you’re going to give out sales that are already made over the internet. It is your distribution point, your physical presence in the marketplace where your customers can interface with you and see you.”

Optimistic outlook
Despite the challenges that lie ahead for small producers, Ward is hopeful. “I don’t see it as a picture of gloom and doom. There is an articulate young population who have travelled extensively and food is very much part of the culture when they are travelling. When they come back to our own country, they have a very good respect for food. And they do seek out something slightly different – at least some of the time,” he adds optimistically.