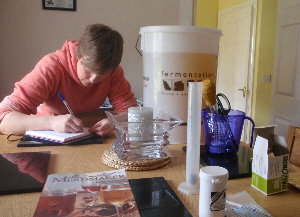 …brewing under the stairs. Homebrewing used to be all about making gallons of strong, cheap beer, with a very limited focus on flavour. Now, in the 21st century, it has taken on a new life with aficionados producing fine beers from homemade breweries. Caroline Hennessy talks to a new generation of craft beer fans for The Irish Mail on Sunday on Sunday 14 March 2010.

Close your eyes and take a sip from the glass. What can you taste? Hoppy, citrus flavours? Or perhaps malty notes of chocolate and caramel? Yes, this is homebrew beer but not as you know it – or might remember it from its 1980s heyday. The latest generation of homebrewers are more interested in flavour than strength, crafting their own ales and porters from home-built backyard breweries. With the current wave of back to basics living, doing it yourself in a sustainable way has never been so popular, from keeping chickens and pigs to growing your own vegetables. It may be a less expensive way of life but, for many people, it is as much about the quality of home produced eggs, vegetables – or beer – as it is about saving money.

When Shane Conroy first set up successful online homebrew shop thehomebrewcompany.ie in Mountmellick, Co Laois two-and-a-half years ago, there was no hint of the economy nosediving. “The recession may be a factor,” he notes in relation to the current popularity of homebrewing, “but it’s not everything. People are going back looking for flavours.” For him, homebrewing is a fascinating pastime; albeit one with the added benefit of producing something that you can drink and enjoy. “We’re all about people getting into the hobby,” he says. “I’m nuts about it myself, I brew a lot of beer and I love tasting different beer, especially if I’m abroad.” Conroy points out that there are only a few small independent breweries in Ireland – he mentions the Carlow Brewing Company, the Hooker Brewery in Roscommon and Dublin’s Porterhouse – but their beers are, he considers, “only the tip of the iceberg in terms of what you can brew.” And their distribution is limited. Like Conroy, many people who start brewing are those who have travelled widely and are unhappy with the limited selection of beers available in Irish pubs.

Homebrewing, explains Conroy, can be as simple or as complicated as you want it to be. There are three ways of making beer at home: the simplest is kit brewing where practically everything is done for you; extract brewing involves a little more skill and time but gives a better result; and all grain brewing is the purest way of making it, essentially following the same steps as a commercial brewer but in your own back kitchen, and with a nicer end product. Often Conroy has seen his customers trade their way up through all three stages. “People find that it’s much simpler than expected. It’s all about learning your technique.”

With the internet, there is a broader knowledge base available to home brewers. “If you go online you can brew nearly any beer in your own home once you start reading up about it,” says Conroy. “Back in the 1980s you didn’t have that.” The internet, specifically the Irish Craft Brewer website, also makes what used to be a solitary pursuit into something a lot more social. Irishcraftbrewer.com, with its articles on brew- and beer-related topics and an opinionated forum, is an active group of fine beer fans. It’s not all about the virtual world, either, as the members organise brewery tours, information events and tasting sessions. “I was at an [ICB] brewing competition a few months ago,” Conroy mentions, “where people from round the country brought their beer. It was all about the flavour that night, that’s what it was judged on.” It also means that there’s always someone to call on if you run into difficulties with your own brew. “If people get stuck, I refer them there,” says Conroy.

Also active on Irish Craft Brewer is Dublin-based Laura Walsh, who was the only woman present at the first ICB meet up. “It’s an online community,” she points out, “but people know each other in real life as well.” New forum members are actively encouraged to come along and bring their latest brew: “Everyone tastes everyone else’s beer and comments on it.” Walsh feels that this encourages people to make more of an effort with their own brewing, commenting that homebrewing may have died in the past away because there was no sense of community.

Having started brewing three years ago, Walsh is getting used to people’s reactions: “sometimes people are a bit surprised. They go ‘Oh, I thought only men would brew beer.’ Or else they’re taking to my husband and they think he’s the one who brews.” Like Conroy, she is keen to demystify the brewing process: “if you can make stew or soup, then you can make beer. It’s not as hard as people think. You can start off with a beer kit…you’ll have beer in three weeks. That’s the easiest way to get started.”

Interested in all things crafty, Walsh has a vibrant pink blog at aranbrew.blogspot.com where she combines knitting and spinning with stories of her adventures in brewing. She enjoys trying out brews with alternative ingredients, seeing that as one of the most appealing things about the hobby. “I was out hillwalking recently and I got heather so I’ve brewed up a heather ale, using heather instead of hops for the flavour. We’ll see how that turns out. There are a lot of different things that you can do [with homebrewing] that you won’t see on a commercial scale. It’s part of the fun of it. It’s a a bit men in sheds as well,” she laughs, “you could spend the day brewing away.”

Gordon Lucey from Macroom in Co Cork has a comprehensive home-built brewing set up in his own shed. “Some of the equipment has come from a hospital kitchen that was being renovated,” he explains. “I reused one of the large, stainless steel vessels that they would use for serving soup. I also picked up an old keg from a scrapyard which was a bit battered but we opened it up and sorted it out.” Between repurposing and recycling, a lot of people’s brewing kit might be what Lucey describes as “a bit Heath Robinson – but it doesn’t matter what it looks like, it’s about the product that comes out at the end.”

He sees homebrewing as being part of the current interest in knowing where what you eat, and drink, comes from: “we’re all into – or trying to get into – our own home produce, all the way from the veggie patch to the plate and, in the same sense, you can just turn it from food to drink.” Lucey also makes the point that you know exactly what goes into your own beer: “there are no anti-foaming agents, there are no short cuts and you just make a quality product. You can use the best of ingredients for your own brewing and it’s still only going to cost you 50c or 60c a pint to make top quality beer.”

The grain, which is the byproduct from brewing, can be composted or – if you’re more in tune with your Good Life self – fed to the chickens or pigs in your back garden. Lucey, like all home brewers, reuses the same bottles time and again. He also points out that a home brewer’s carbon footprint is minimal: “the barley, most of it that I use, is grown in Ireland. There’s no transport really.”

Besieged by memories of past homebrew experiences, you may be wary when offered a glass of homemade beer but you just might be pleasantly surprised. Lucey enjoys other people’s reactions: “when you’ve a few friends over, you know you’re doing something right when they go home and haven’t touched the beer that they brought. That,” he chuckles, “always puts a smile on my face.”