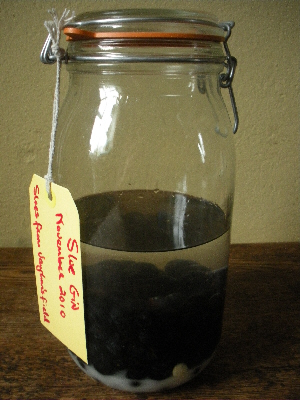 A winter warmer? It’s just got to be Sloe Gin. The first time I tasted it was in 2002 when the then Boyfriend and I were staying with the IT Specialist near Cambridge and an unlabeled bottle was produced late at night. I savoured every last drop and remembered enough the next day to ask our friend for his grandfather’s recipe. As I remember, it was along the lines of “half fill a bottle with sloes, add sugar and gin. Shake every day and then strain through a gorse.” A gorse? I hear you ask. Well, Chinese whispers meant that there was something lost in translation between the English grandfather and the Irish girl demanding the recipe. I thought he must have some kind of “traditional” knowledge and quietly determined to use a sieve myself. It was only months later that we discovered that he had meant gauze rather than an actual branch of a gorse bush. So much for traditional knowledge.

Since then, we always have a (gorse-free) bottle in the house. Something that tastes like Christmas in a glass can never be a bad thing. When we still had our damson tree, I used to make Damson Gin as well, and last winter I laid down a medicinal supply of Elderberry Vodka which is supposed to be a good immune booster. No hardship to take a couple of spoonfuls of that medicine when you feel sniffy.

Even this late in the year there are still sloes in the hedgerows, just waiting to be steeped in alcohol. Down the fields, Little Missy was the self-appointed picking assistant (you can see one of my other helpers below). She went for the sloes on the low branches, putting them into the basket with encouragement but always holding a few back for eating. We always had to try them as children but, put off by the mouth-puckering astringency, never could have eaten a whole one. Not so LM. Despite the fact that they really didn’t taste very nice – there were a lot of screwed up faces being pulled – and mighty discouragement from me, she made sure that she got a few tastings. For everyone else, I’d recommend going the gin route.

The Irish foodie cookalongs now have a group on the Irish Food Bloggers Association site, along with the Facebook page and new Twitter account. Next time? It’s the Christmas Cookalong on 3 December so dig your seasonal recipes out! 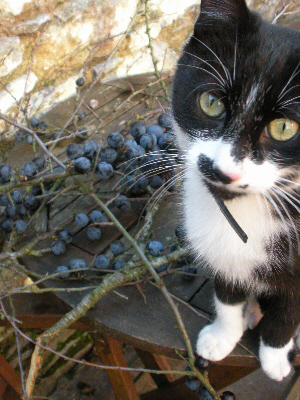 Sloe Gin
Traditionally, sloes are never picked before the first frost and indeed they do mellow somewhat after colder weather, as Little Missy would no doubt tell you. You are supposed to prick the sloes with a needle before adding them to the gin but have you ever tried pricking small berries while a LM tries to help? Not a good result. I find the freezer method is easier and works just the same.I don’t like to add too much sugar to the mixture but if, when bottling, you think it tastes too sharp, then you can add some sugar at that stage, shaking the bottle to help it dissolve. The almonds are a new addition this year: talk to me in 12 months to see if it worked out!

Wash the sloes, pick off all the stems, discard any bad fruit and freeze.

When frozen, place them into a large 1 litre sterilised Kilner jar with the sugar, gin and blanched almonds. Shake every day until the sugar is dissolved.

Keep in a cool, dark place for at least three months before straining and bottling. I like to leave it mature for a year after that but, if you can’t resist, enjoy a nightcap of Slow Gin neat or as a Slow Gin and tonic.