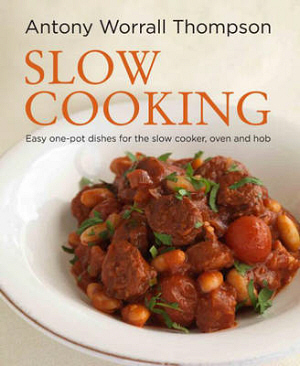 I wish I could be the kind of person who says that I’ve no interest in kitchen gadgets (and mean it) but that would be a total and absolute lie. My 10-year old immersion blender was recently replaced after it got a little overworked from Little Missy’s weening dinners and, faced with the idea of no blended soups, homemade mayo or lump-free gravy (it happens to everyone, y’know) I came out in a cold sweat and headed straight to the shops.

The bread machine, which I picked up from Gumtree for a tenner two years ago, is in constant use. This weeks’ breads? Little Missy’s favourite cheese and mustard loaf for lunchtime soups and a breakfast one, flecked with shreds of marmalade, for toasting. Gumtree was also the source of my slow cooker, which I picked up at the start of the summer. Another €10 so, I figured after a bit of heming and hawing, nothing venture, nothing gain.

In NZ the slow cooker – or crockpot – is king so that was where my fascination began. Delighted with my purchase, I put it on the counter and promptly did nothing with it. It was summertime, the weather was good, who wanted to be figuring out a new piece of kitchen kit – especially as it came without instructions – when there was gardening to be done?

As the colder weather rolled around again, I started, slowly, to try it out. Inspiration came from Dinner Du Jour‘s hit list of slow cooker recipes and a realisation that I could actually prep a meal and leave it to cook without any fear of burning while Little Missy and I were otherwise occupied (ideal occupation: her asleep, me working). It really hit paydirt for me when we got the first of four brace of pheasant from a generous neighbour. After all the hanging, gutting and skinning was out of the way, all it took was long slow cooking with cider and apples to make them deliciously fork tender.

So when a review copy of Antony Worrall Thompson’s Slow Cooking (Mitchell Beazley) landed on my desk, it was welcomed with open arms. I was looking more for techniques (still not sure about the amount of liquid I should be adding) rather than recipes but there’s plenty of both here.

This is s-l-o-w cooking in every sense of the word. While the preparation time is the same as it would be for any dish, the cooking time for the majority of the dishes clock in between 6-8 hours – perfect if you’re away from the house all day – but you could have a relatively speedy supper with a Baked Eggs dish that comes in at a record 35 minutes. There are plenty of tips at the start, which is perfect for someone who has no instructions. Who knew that taking off the lid during cooking breaks the seal and adds an extra 20 minutes to the cooking time?

So far I’ve made a Cauliflower and Potato Spice Soup which, with a little less liquid, did double duty as a curry with rice, a take on Beef Bourguignon and, most controversial of all, a self-saucing chocolate pudding. It was the kind of dish that looked terribly unpromising until I served it up, at which point the Eight Degrees boys went “more please!” Emboldned by that experience, I may now even have to try the Apricot and Orange Chutney.

Must Try: A Chocolate Saucy Pudding – if only for the sheer gasps of disbelief – Winter Venison with Herb Dumplings, Mixed Grain Jambalaya, Apricot and Orange Chutney

Slow Cooking by Antony Worrall Thompson is published by Mitchell Beazley. Thanks to the publisher for the review copy.