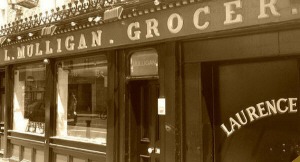 L. Mulligan. Grocer. - the home of the best Irish Coffee in Ireland

On the eve of St Patrick’s Day, one’s thoughts turn – quite naturally – to Irish Coffee, especially if you’ve been at all following L Mulligan Grocer‘s search for the best of the best of Irish Coffee.

During the Eighties I worked in a hotel restaurant (which shall remain nameless!) and, when asked for Irish Coffee – there were quite a few Americans floating around that angle of Co Limerick – we got out a bottle of pre-mix, floated some already aerated cream on top and no one worried too much if it started to sink before you got to the table.  I, a 16-year-old purist, was horrified.  The fact that the consommé came out of a tin and was reconstituted made me rethink my then-ambition to become a chef. Suffice it to say that I don’t have particularly good memories of Irish Coffee. But that just might have to change.

In the interests of finding the best Irish Coffee, Mulligan’s used hand-roasted coffee supplied by three different roasteries: Ariosa, Hasbean (supplied and chosen by 3FE) and Bailie’s in conjunction with Coffee Angel.

The coffees were all individually chosen by the roasteries to complement the selected whiskey which was Kilbeggan, from Cooley, the only Irish-owned distillery. The cream was supplied by the always fabulous Glenisk.

And the winner? After Tuesday night’s blind tasting, according to an @LMulliganGrocer Tweet: “the Ultimate Irish Coffee is made w/ coffee from @BailiesCoffeeCo, cream from Glenisk + Kilbeggan whiskey @CooleyWhiskey”

So now you know! And, if you’re interested in learning a little about its history, here’s a piece that I wrote on it for a whiskey supplement that the Irish Times published on 19 November 2010.

A little bit of Irish in it: a short history of Irish Coffee

For a brief time between 1939 and 1945 the small town of Foynes in Co Limerick was at the heart of the aviation world. After the first successful commercial flight in July 1939, it became a stop over point for Pan Am’s luxury flying boats on the direct USA-Europe route. It was no easy trip. It took over 25 hours to fly directly from New York to Foynes and when the plane landed the passengers had to be brought by boat to the terminal.

It was the first contact many American VIPs had with Europe and a young Irish chef called Joe Sheridan, working in the terminal restaurant, did his best to make it a memorable one. Feeling that passengers needed a bit of cheering during cold, wet winter weather, in 1942 he added some Irish whiskey to their coffee and a whole new drink was born.

Irish Coffee immediately became an integral part of the menu and introduced many travellers to the joys of Irish whiskey. With the development of land planes, Foynes’ part in aviation history soon came to an end. When a new airport was opened across the way in Shannon, Joe Sheridan took his then-famous recipe there and he is still celebrated at the Sheridan Food Pub in the depatures lounge.

The introduction of Irish Coffee to America is contentious but its arrival is often credited to American travel writer Stanton Delaplane. After tasting it on one of his trips, Delaplane brought the idea back to the States and persuaded Jack Koeppler, the owner of the Buena Vista Café in San Francisco, to start making it. It took a lot of experimentation to get the recipe just right. But manage it they did it and a plaque at Buena Vista claims to celebrates the momentous occasion in 1952 when the first Irish Coffee was made in America.